You are here: Home » Babylon » False Church » Former Catholic Cardinal and Archbishop accused of being a great deceiver.
Share this post: 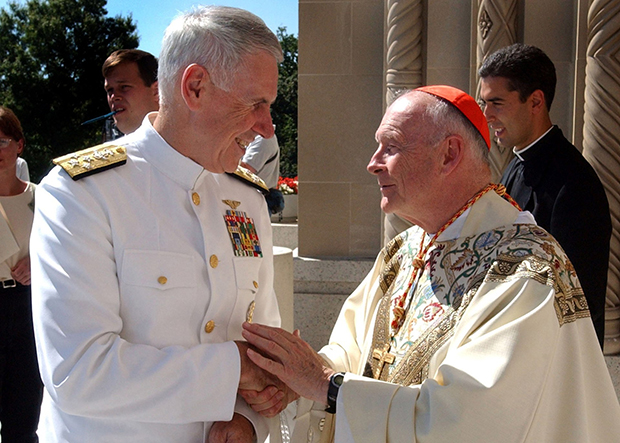 The Lord Jesus gave us a prophetic sign marking the season of His return, warning it would be a time of great deception coming upon many people with the source of the deception coming from those who come in His name. (Matthew 24:4-5) In that context, consider the amazing allegations shared in the following post regarding a former Cardinal and Archbishop of the Catholic Church in Newark and Washington DC, Theodore McCarrick.

A priest who was the personal secretary of former cardinal Theodore McCarrick said he is sickened by manipulative fundraising tactics employed while McCarrick was Archbishop of Washington. The priest called McCarrick a “manipulator” and a “devourer of souls.”

“For a portion of my priesthood, I worked directly for the foremost fund-raiser in the Church – in the whole Church, the universal Church.”

“He was a master of the art, and knew every technique and tactic to its finest point. He paired with that an extraordinary, even preternatural sense of people, what they wanted and what they needed,” Monsignor K. Bartholomew Smith wrote Feb. 15 on a blog he maintains for parishioners of St. Bernadette’s parish in Silver Spring, Maryland.

“My stomach churns at the recollection, and not only because of how successful he was at this; but also because of what he obtained by this. He received the gratitude, the affection, and the emotional dependence of untold numbers of people high and low, rich and poor, because he made himself the bestower of the approval that they craved, told them that they were good and God Himself was grateful to them, and delivered them from the authentic demands of Jesus and His Gospel.”

“This is what their giving purchased, and what his fundraising obtained. But he took more from them than just their donations, for he was a ravening manipulator of human affections, and a devourer of souls,” Bartholomew added.

The priest, who was ordained in 1998, was McCarrick’s private secretary in the early 2000s, before being appointed to serve in a similar role for Cardinal William Baum, who was then living in Rome.

Smith told his parishioners that “you would be hard pressed to find a person in our Archdiocese, Catholic or not, who did not fall for [McCarrick’s] seduction to some degree, or at some time. We all want approval; we all enjoy gratitude. He offered Divine approval and God’s own gratitude, and many were the ones who did his bidding to obtain it.”

McCarrick, Smith wrote, “was a master of convincing folks of the pernicious delusion that God Himself needed, approved, and in fact was grateful to them for the difference that they were making in the world. This, in one line, is the snake-oil song of the ecclesiastical fundraiser, and he was the all-time virtuoso chanter and enchanter.” (Continue reading this post.)

These allegations make no mention of even worse crimes as McCarrick has been accused of engaging in homosexual conduct with adult male seminarians over the course of decades, which was alleged to be an open secret in some church circles. Although his crimes were repeatedly reported to American bishops and the Vatican between 1993 and 2016, decades passed before he was finally “forced” to retire in 2018, but by then he was 88 years old and due for retirement anyway. (Source: Wikipedia)

When viewed in that context, the recent comments from Monsignor K. Bartholomew Smith shown above are way too little, way too late.

Growing up Filipino Catholic and in the church for 25 years I can speak from experience. I found Jesus in college, got saved and never looked back. From the hypocrisy of “poverty is piety” to worshipping statues amongst other things, for me there was always a disconnect from the Bible.

This video of Pres. Duterte is a mix of English and Tagalog, but he makes his point: https://www.youtube.com/watch?v=qQDLp6J4wq4

Also, I believe this Biblical passage is referencing the Catholic church, especially verse 3 which relates to priests and nuns having to be celibate and eating only fish on Fridays during Lent :

1 Now the Spirit speaketh expressly, that in the latter times some shall depart from the faith, giving heed to seducing spirits, and doctrines of devils;

2 Speaking lies in hypocrisy; having their conscience seared with a hot iron;

3 Forbidding to marry, and commanding to abstain from meats, which God hath created to be received with thanksgiving of them which believe and know the truth.

4 For every creature of God is good, and nothing to be refused, if it be received with thanksgiving:

5 For it is sanctified by the word of God and prayer.

May HE open your eyes to the Truth (Jesus) and set you free from a spirit of religion and bondage. God bless!

Your Brother in Christ,
S. Peter

Thanks for illuminating the meaning of this scripture passage S. Peter. I had not made that connection before.