You are here: Home » Church » Mighty Ones » “I am calling forth My valiant ones!” 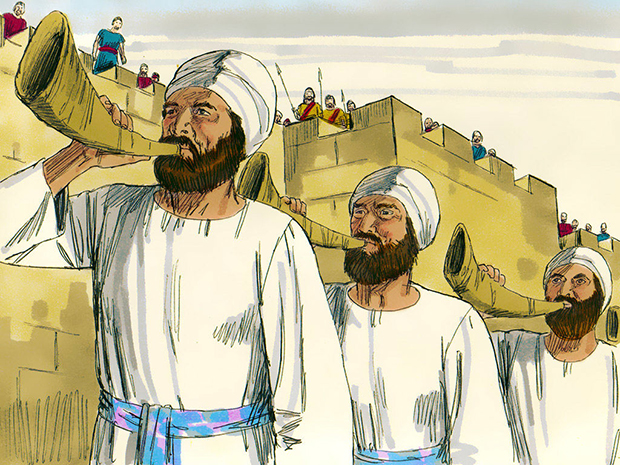 The morning of October 10th, what I will describe as “the stand” occurred. I’d been praying for some time that morning when I noticed I could feel the armor of God upon me.

Suddenly, I saw myself in the spirit dressed in full armor from head to toe. It was impressed upon me to stand up. As I stood, in my left hand was the shield of faith, and the sword of the Spirit was drawn and in my right hand. I was led to walk across the room and stand. Total peace enveloped me as I stood there. I was acutely aware that the protective armor of God was unshakable, and I was standing in Christ Jesus – in ALL that HE IS!

A while later as I sat thinking about what had happened, the Holy Spirit said,
“I Am Calling Forth My Valiant Ones!”

There was more given later that day which will be covered separately. But for now, I will fast forward to October 19th. On this day, I had begun writing up this post when everything came to an abrupt halt. I knew there was something more God wanted to show…

The Holy Spirit began to speak:

“I am calling forth My Valiant Ones!

The Fullness of the Gentiles Has Come In!

The thoughts of their heart are only evil continually and will manifest for all to see.

The apple of My Eye will turn back to Me as her gods are brought low. Her champion will be cut down, and a cry will be heard throughout the land.”

Interpretation:
I was totally shaken and immediately began asking the Lord for further understanding. The first thing shown was that He was speaking of the SIN of the Gentiles coming into fullness, not the “time” of the Gentiles spoken of in Luke 21:24 or Revelation 11:2. As we know, their “time” of rule will officially end at Jesus’ return, when the Kingdom of God is set up. He was speaking of SIN coming in to FULLNESS!

There are many examples in the Old Testament of God holding back judgment, of not allowing Israel (or others) to destroy and take possession of lands unless the sin of the inhabitants was complete, or full. Abraham was told in Gen.15:16 that because the iniquity of the Amorites (in the land of Canaan) was not yet complete, it would be 400 years before his descendants would return to the land. By the end of that time, the fullness of the Canaanites’ sin had come in.

One city in particular was chief among them. Jericho was one of the strongest fortresses in the land, and had become the principal seat of the most vile and degrading religions of the Canaanites – the worship of Ashtoreth and Baal. The goddess of fertility was worshipped with the blurring of genders, as male followers committed sodomy with the priests and priestesses during worship services. In addition to every sexual abomination imaginable, child sacrifice was common practice as they sought to appease their gods.

Jericho was situated as the first line of defense in the land of Canaan, and the first to be conquered when Israel crossed the Jordan. News of the miraculous acts of God and the collapse of this mighty fortress struck fear throughout the land.

God is the same yesterday, today, and forever! He times His judgments with the fullness of sin. When a people or nation reaches its fullness, judgment can no longer be stayed.

Most of the interpretation was supplied within the word given. We know Israel is described as the apple of God’s eye (Zechariah 2:8). Most would agree the “Champion” of Israel is the United States of America.

When the Lord had me search out “The Fullness of the Gentiles…,” it led me straight to Israel entering the promised land AFTER the sin of the Canaanites had come to fullness. Similarities between Jericho, the first to fall, and the United States are striking:

Like Jericho, the U.S. is one of the strongest fortresses in the world. Sadly, she too has become the principal seat of vile sexual practices, and the sacrificing of her children as she worships the gods of this world. The fall of Jericho struck fear throughout the land, as will the fall of America.

God is saying, “The Fullness of the Gentiles Has Come In!” Israel’s champion will be cut down, and a cry will be heard throughout the land. I believe this cry will be heard in many nations. Israel’s gods will be brought low, and gradually her eyes will turn back to her One True God.

As Joshua and others after him were instructed to call forth valiant warriors to be used by God to go in and dispossess the land, even so now is the Lord saying, “I am calling forth My Valiant Ones!”

The Lord is again bringing down the walls of a mighty fortress. One-by-one, the nations will be brought low. This time, those who worship Him in Spirit and Truth (Spiritual Israelites) will be sent to enter the camp of the enemy!
The Lord is calling His Valiant Ones to stand at the ready, fully clothed in the armor of God.

Saints, please pray diligently about what has been shared here. A major shift has occurred, and there is an urgency in the Spirit I’ve never felt before.

Scripture References:
For I do not desire, brethren, that you should be ignorant of this mystery…that blindness in part has happened to Israel until the fullness of the Gentiles has come in. (Romans 11:25)

…and Jerusalem will be trampled by Gentiles until the times of the Gentiles are fulfilled. (Luke 21:24)

But in the fourth generation they shall return here, for the iniquity of the Amorites is not yet complete. (Genesis 15:16)

…the LORD your God has given you this land to possess it, all you valiant men shall cross over armed before your brothers, the sons of Israel. (Deuteronomy 3:18)

But you shall pass before your brethren armed, all your mighty men of valor… (Joshua 1:14)

Diana: I agree with what you have written. Over the last two days I have heard something similar, tonight our Father spoke powerfully….we are not using the authority He has given us. So your experience of God calling out His Valiant Ones, this confirms a writing of mine this evening. Blessings, Kasey
https://propheticdreamsvisionsandwritings.blogspot.com/2018/10/binding-and-loosing.html

Thank you for sharing this powerful and encouraging message. Our gaze is to be upward and our armor is Christ. “For the word of God is quick, and powerful, and sharper than any twoedged sword, piercing even to the dividing asunder of soul and spirit, and of the joints and marrow, and is a discerner of the thoughts and intents of the heart. Neither is there any creature that is not manifest in his sight: but all things are naked and opened unto the eyes of him with whom we have to do.” (Hebrews 4:12) The gods will also start to look little in the eyes of the apple of God’s Eye. May we walk worthily in His sight.

Diana, you say a shift in the spirit has occurred. I feel it too. I’m praying for wisdom and understanding as I study the prophecies to know more clearly what that means for us.

This part of the message caught my attention: “The apple of My Eye will turn back to Me as her gods are brought low. Her champion will be cut down, and a cry will be heard throughout the land.” When I saw that I thought of Christopher Harris’ word on October 13 that Trump will be taken out in five weeks or by about Nov 17.

The timing of your “stand” on October 10 also got my attention. By the reckoning of some devout Jews that was the Feast of Trumpets and as James has illustrated your message, it is a message of trumpets. Twenty two days after that is October 31 the high day of the pagan gentiles, but also the 501st anniversary of the Protestant Reformation and the final day of the Feast of Tabernacles. 501 years ago, the trumpets of the reformation began to sound when Luther hammered his 95 Thesis to the door or the great fortress of Catholicism. It was a seismic event that shook the world.

Christopher Harris was not shown Trump taken out of office in five weeks. He was only shown there is a plan in place to take him out. So it was a warning but it can be avoided if we pray.

Sadhu Sundar Selvaraj said “If we pray (so that GOD’s plans are not aborted) Donald Trump will be re-elected in 2020”.