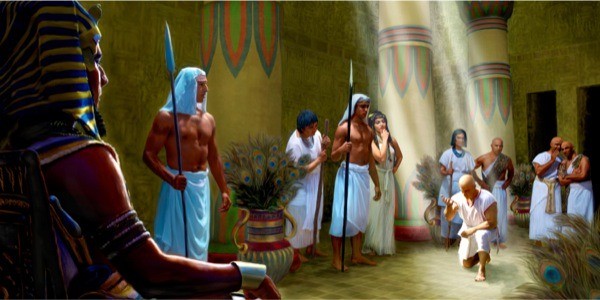 I saw before me twirling figures as if dancing in another time with sacks on their backs. They were adorned by jewelry, fancy clothes, and had their hair done up.  I was made to understand they were joyful in the Lord for having listened and prepared.

Then I heard “I am raising up the Josephs. The date the famine begins is January 16th”.

I went back to sleep, but was awakened again and saw in the spirit a huge pile of mechanical bows, but no arrows to go with them.

Then I went back to sleep again, but was awakened again and saw in the spirit as if in the corner of my room a very tall figure that appeared to be in a dark robe.  I heard, “Tell them what is coming”.

I said, “Yes, I will tell them anything you say.”

In my head I heard, “There is no God like Jehovah,” playing over and over again from deep with in me.

Contemplating these things, I believe the first vision represented a picture of those people who will have plenty in the time of famine that is coming upon our nation.  We are facing a great famine and I feel like this will be a time of lack of food and a lack of all resources for many people who have been asleep to the times we are living in.  But for those who have been and are awake, they will rejoice in the Lord for His great provision.

I asked the Lord to help me understand what the pile of bows with no arrows represents. I feel it will be a time of great war when so many will lose their lives that all the “arrows” will be used up and there will be no more men to carry and fight with the “bows”.

The tall figure in a dark robe represents the angel of death and destruction who has been given the key to death and hades.  He is coming to take many who are living outside of the Lord.

Then I heard this:

“Write what I have to say to the Nations: You have not heeded my warnings.  You have not stopped to bow to me, and now I will break your back.  You forget that it is I that raises up kings and nations and it is I that causes them to fall.  But you will remember again!

I call to you now My people to awake from your slumber.  Sober up so that you can see what is going on around you.  Listen to My voice and follow Me.  The war will rage around you. Many will fall at your right hand and your left, but determine to keep your eyes on Me.  I will lead you through the darkness and into the great light my children.”

I was led to Ephesians 3 where the Apostle Paul writes:

7 Whereof I was made a minister, according to the gift of the grace of God given unto me by the effectual working of his power.
8 Unto me, who am less than the least of all saints, is this grace given, that I should preach among the Gentiles the unsearchable riches of Christ;
9 And to make all men see what is the fellowship of the mystery, which from the beginning of the world hath been hid in God, who created all things by Jesus Christ:
10 To the intent that now unto the principalities and powers in heavenly places might be known by the church the manifold wisdom of God,
11 According to the eternal purpose which he purposed in Christ Jesus our Lord:
12 In whom we have boldness and access with confidence by the faith of him.
13 Wherefore I desire that ye faint not at my tribulations for you, which is your glory.
14 For this cause I bow my knees unto the Father of our Lord Jesus Christ,
15 Of whom the whole family in heaven and earth is named,
16 That he would grant you, according to the riches of his glory, to be strengthened with might by his Spirit in the inner man;
17 That Christ may dwell in your hearts by faith; that ye, being rooted and grounded in love,
18 May be able to comprehend with all saints what is the breadth, and length, and depth, and height;
19 And to know the love of Christ, which passeth knowledge, that ye might be filled with all the fulness of God.
20 Now unto him that is able to do exceeding abundantly above all that we ask or think, according to the power that worketh in us,
21 Unto him be glory in the church by Christ Jesus throughout all ages, world without end. Amen. (‭‭Ephesians‬ ‭3:7-21‬ ‭KJV‬‬) 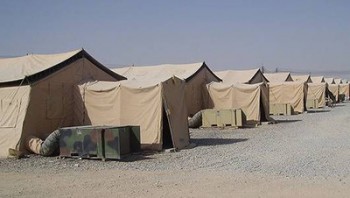 I then saw a picture of a great expanse of tents that look like small army tents propped up in a wide open space.  They are exposed to all the elements and are defenseless against the forces of nature.  I then see in the distance a mighty and marvelous castle fortress.  I’m reminded of the way the Lord made a way for Joseph to be positioned safely in the castle of the ruler and to have authority over the riches of the kingdom.

God Almighty is inviting us in to his castle in this late hour.  Some of us have been living just outside the gates, so we don’t have far to go.  We are being made to see the storm coming and He is calling us to come inside.  Still others have erected their flimsy tent covering very far from the mighty castle of the Lord.  They have a long journey to get from where they are, living under the lie of the false covering, truly exposed and vulnerable, to where the castle of the Lord is and where safety can be found.  They must awaken right now to have time to make it before the great storm arrives and is raging and there is no longer a way.  Every false covering will be destroyed and all those who choose to dwell in them.