You are here: Home » Church » California Woman Sues Christian College After Being Fired For Fornication
Share this post: 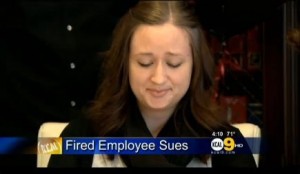 San Diego, California – A former staff member at a Christian college in California has filed a lawsuit against her employers for firing her for having sexual relations outside of marriage, stating that the college’s actions were “un-Christlike.”

Teri James, 29, worked as a financial aid specialist at San Diego Christian College in El Cajon until October of last year when she admitted to the school’s human resource director that she was pregnant. According to reports, rumors had been circulating on campus that the single woman might be with child, and therefore, she sought to put an end to the speculations.

However, upon being informed of the matter, the human resource director presented an ultimatum: resign or be fired. James was later given a termination notice that stated that she “engaged in activity outside the scope of the handbook and community covenant.”

San Diego Christian Christian College requires that all of its employees sign a lifestyle statement committing to live in a manner that is consistent with Biblical values, which includes abstaining from fornication. James admits to signing the statement, but still believes that her termination was unlawful. She hired renowned feminist attorney Gloria Allred to represent her in the courts.

“Teri engaged in activity outside the scope of the handbook and community covenant that does not build up the college’s mission,” Allred acknowledged. “The HR director indicated that she was not being fired because she was pregnant. Instead, she was being terminated because she had premarital sex.”

During a press conference this week, James broke down in tears over the matter, claiming that the school has caused her harm.

Wait a minute! Isn’t SDCC punishing this woman for choosing to NOT abort her baby?
It can be interpreted that way. If she had ‘quietly’ done away with her child, then no one would have known, and she wouldn’t get fired. Is not SDCC’s decision to fire her encouraging other female employees who become pregnant outside of marriage to abort their babies?

You knew the rules when you took the job and knew what would happen, if they where broken. Find another job