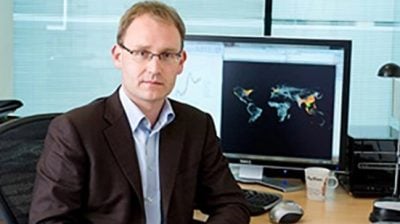 What this article fails to acknowledge is that Neil Ferguson’s “Mathematical Model” was generously funded by the Bill and Melinda Gates Foundation.

The unspoken objective was to spearhead the fear campaign as well as provide a pretext and a justification to impose the March 2020 lockdown which resulted in the near closing down of the national economies of 190 member states of the United Nations, creating economic, social and political chaos Worldwide.

This was “fake science” in support of powerful financial interests. To put it mildly, the scrutiny should also apply to the sponsors of  the lockdown

Professor Neil Ferguson, the controversial epidemiologist who predicted there would be as many as 200,000 COVID cases a day in the UK if restrictions were lifted, is facing scrutiny after infections continued to drop for the 6th day in a row.

The day before so-called ‘freedom day’ in England, where most mask mandates and social distancing restrictions were lifted, Ferguson was asked by the BBC’s Andrew Marr where the country was heading as a result.

“It’s very difficult to say for certain, but I think 100,000 cases a day is almost inevitable,” said Ferguson, adding, “The real question is do we get to double that or higher? We could get to 200,000 cases a day.”

The professor went on to warn of “major disruption” to the NHS and the interruption of elective surgeries.

Ferguson is being proven wrong by the statistics once again, which today showed there were 24,950 new coronavirus cases, the sixth consecutive daily fall.

“Lockdown zealots will attribute this decline to the vaccines, but that begs the question of why they weren’t confident the vaccines would prevent cases from surging when they predicted armageddon last Monday?” asks Toby Young.

As Christopher Snowdon highlights, the scientists who claimed England’s unlocking represented “a threat to world” are also being proven spectacularly wrong. SAGE government advisers who claimed that relaxing restrictions was “a dangerous and unethical experiment” also face embarrassment.

In a superb touch, the graph under that quote in the Guardian article headlined ‘England’s Covid unlocking is threat to world, say 1,200 scientists’ automatically updates once a day. https://t.co/eRXqybDxja pic.twitter.com/ByHhFCDVer

The issue once again begs the question; Why does the government continue to follow advice given by arch-lockdown advocates who have got it wrong time and time again?

Don’t forget that it was Ferguson who infamously warned that half a million Brits would die without a draconian lockdown, despite the fact that countries like Sweden which didn’t impose lockdown had similar waves and infection rates.

Not only has Ferguson repeatedly proven himself to be totally unreliable (after having already disgraced himself during the 2001 foot and mouth outbreak), but he infamously betrayed what he really thought about the severity of the pandemic via his own behavior.

During the first lockdown, when Ferguson himself was predicting up to half a million deaths, the professor took the threat of the virus so seriously, he allowed his mistress to violate the rules by traveling back and forth across London to continue the pair’s sordid affair.

Featured image is from Wikimedia Commons

Note: This post was originally published by Globalresearch.ca and is shared in accordance with fair use terms for nonprofit educational purposes.