You are here: Home » News » Israel and Middle East News » Bob Jones: Warning to America, Do Not Put Pressure on Israel 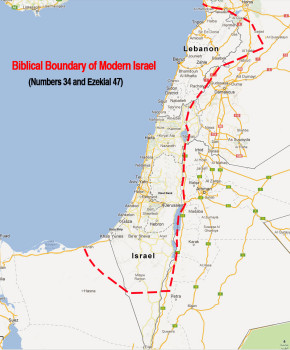 Prophetic Minister Bob Jones recently warned America not to put pressure on Israel to divide her land. The following is the transcript of his comments. The video presentation of him making these comments is also shown below.

“One of the worst things that could happen to America. The last time we butted into Israel’s business we pressured them to divide Gaza and New Orleans got all the rain they wanted. There is an intention now of dividing Jerusalem and if this takes place the new Madrid fault will divide United States. Isaiah chapter 18.”

“If we mess with Israel we will become a Third World nation and the new Madrid fault will divide this nation.”

“The rabbis are afraid that we are going to invade Israel with NATO troops which would be American troops. If we did we would stop being the police force of the world immediately because the earthquakes would shake us until you would not believe what would take place. The polls would shake. The place would shake. It is not yet time for the new Madrid fault to quake but our actions in Israel could hurry it up. It is time for the California earthquake.”

“This flood and all of these other things are nothing compared to what the new Madrid fault earthquake would do to America.”

“Bobby Conner. and I were sent to the state of Washington, Spokane, more than 10 years ago. We were told to go there. I was told to go there first to awaken people to pray for Israel. There was going to be an assassination attempt against Benjamin Netanyahu. So I went out there and I pray for three days. We were in a portal and we were right under it but we did not get an answer. I got a call from Bobby Conner. He was somewhere on the East Coast and the Lord told him to get out there and help me. So he flew out there. I told him to get out there and bring the word that you have. We prayed another three days and we knew that it was done. We did not know it but about 3 1/2 years later, Benjamin Netanyahu was sharing with some people that he was going over into Jordan to offer them a peace treaty to live with. He was taking his cabinet over there. An angel withstood him face-to-face and told him, “Do not go there because they intend to kill you.”

“We knew then that God had a major purpose for him. We knew that he would come back into power again. The Lord spared his life. I think he spared Netanyahu’s life so that he could spare our life.”

“It was a strange thing. We went to Spokane Washington and one of the main religious leaders there said, “Anyone in my church that goes to that prayer meeting for Israel is out of my church. And anyone in any of the other churches that goes to that meeting is out of relationship with me.”

“The intercessors who came there came from Canada and from all over the world, But none of them came from Spokane Washington. After it was over with, we love. Two weeks later, he went fishing with his son. They found the boat, but never the bodies. So messing with Israel is a very serious thing.”

“I have also told the people who live in California, especially in Los Angeles, i have told them to relocate, get out. My job is not to force anybody to do anything but to warn them. We are in a very serious time. We need prayer. Praise will bring prayer and prayer will release prophecy. We need the word of God spoken in agreement so we can have mercy. Wisdom is getting ready to come and justify you and your sacrifices and to give you the understanding you need on what to do. Anyone who says they understand what is going on now, do not believe them because the father is waiting on those to seek him so he can give them understanding. Seek Him and you’ll find Him.”

Download or print a PDF file copy of this article.

wow, Sadhu Sundar Selvaraj have the same messages, regarding the divided of US if agree to divide Jerusalem.
He said, the angels are on its places in mountai san andreas just to wait the command from their chief to hammer san andreas, ” just as US divided Jerusalem in two so will be with the US”

I had a vision while waking to the store. It was a summer day, the car was in the shop, so I decided to walk. We miss a lot when we don’t take time to walk, so I walked. I was crossing over a small water run off, on a bridge. I stopped for a moment and looked at the water, then began to walk on, when I had a vision. I saw two flags on poles, with the poles crossed over each other and the flags hanging down. Reminded me of lapel pins I had seen. At first I was overjoyed to see those two together, as they were in the palm of a huge hand. Then, I heard this: These two will break your heart. Ohhhh. I understood that there were factions in the governments that were set to bring conflict, to frustrate the will of God. Without the banner of Christ over these nations governments, conflicts and intrigues would continue to grow. That was in 1993. Now we see the Vatican involved with the two state policy, and factions here and there are working to that end. Officially, however, Israel and America are seen as allies, but that seems to be only on the surface. So many aggressive motivations that seem to be legitimate are not, and the factions, or should I say, the fifth column is working to bring down both democracies. We tend to look at both countries through the lense of the blessings given both, but we often overlook that the governments are secular in nature, now. It is in my heart to pray for the peace of Jerusalem Psalm 122, however, consensus will not bring about peace, only the Lord.

Pray for the peace of Jerusalem: they shall prosper that love thee. Ps 122:6

THATS TRUE . I FELT GOD WARN ME ABOUT WEST COAST ABOUT 3 YRS AGO. HE SAID TO ME PRAY FOR THEM MAKE SURE GET BORN AGIAN AND SHULD BE LEAVE THAT PLACE SOTHERN CALIFORINA AND NORTHERN POSSIBLE . I FELT COULD BE VERY VERY BAD . I DO PRAY WEST COAST. AND I WISH WHITE HOUSE LEAVE ISRAEL ALONE . WHY ? AND GOD CHOOSE ISRAEL YEARS YEARS YEARS AGO . GOD SAY DON ‘ T TOUCH JERUSALEM THAT’ S IT . THEY KNOW BETTER THAT . I BET GOD WARNING THEM OVER OVER OVER NOW LOOK GET WORSE . SEEM LIKE SPEECHLESS AND POWERLESS . I EXPECT THAT WE NEED OVERCOME AND GOD HELP US USA IN YESHUA NAME AMEN

Through these things Yahweh is raising up a people who will be true to Him in all seasons. They know their elect destiny and are determined to finish the race to go on to perfection through the fire. They will climb the spiritual mountain of His presence as they grow from glory to glory until they reach the fullness of the measure of the stature of Christ. Christ in me the hope of glory is the RAPTURE. We are not waiting for Jesus as much as the Father is waiting for us to grow up. No immature or flesh driven people will be zapped into His holy presence. Rev. 11: 13-19, 12-1-2. Also read Eph. 4:1-25; 2 Cor. 33-18; I cor. 15 and Romans 8.

Amen! We pray for Israel’s protection every mealtime, everyday, we ask that the Father bring His children all home safely.
In every nation and every government there are bad apples that ruin it for the rest of us. If Israel does things wrong, God will see to it. It’s not our problem. My understanding is that they did not spend 40yrs in the desert because they liked camping. We should let God be God and we His servants obeying Him and praying. Period. And to add, if you look at so many nations that have had some sort of tragedy, a few you will find that in some way or another have gone against Israel. Coincidence??

dont pressure israel?? are you out of your mind? better to increase the pressure to behave in a godlike manner and for them to stop abusing the palestinians and all who get in their way. zionist run israel is a scourge on the planet, and besides, the zios run amerika anyway.

You can take sides against Israel if you want to, but if you do you will be taking sides against God because He said to Abraham, “I will bless those who bless you and curse those who curse you” (Genesis 12:3). God chose to bring the salvation of the world through Israel and He is not done with them yet. Many of God’s promises are yet to be fulfilled. It is not a coincidence that Israel is the only nation in history to be conquered and dispersed among the nations only to return to the land and become a nation again in 1948. It is not a coincidence that modern Israel has won wars repeatedly in which they were outnumbered more than ten to one. Open your eyes and see the hand of God. He fights for Israel. If you take sides against Israel, you are fighting against God and you will lose!