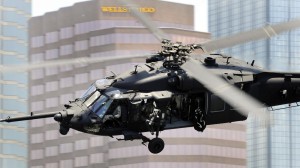 In one corner, we have squadrons of fully armed Blackhawk helicopters invading crowded downtown areas in major U.S. cities. In the other corner, we have a 5 year-old girl, unarmed but threatening to shoot bubbles at her friend with a plastic Hello Kitty Bubble Gun. Let’s get ready to RUMBLE!

Last week, swarms of U.S. Blackhawk helicopters invaded busy downtown areas of Miami FL and Houston TX in a surprise attack, completely terrorizing local citizens. U.S. soldiers on board the low flying Blackhawks fired very loud rounds of machine gun blanks at citizens. Local citizens had no way of knowing the rounds were blanks, so after wetting their pants they ran for cover and hit the ground in utter horror.

Josh Epperson, an Atlanta resident who just happened to be in Miami said, “I just heard all this machine gun firing and I hit the deck. I didn’t know what to expect but it was one of the loudest things I have ever heard.”

After a flood of phone calls to local police and television stations, followed by more calls to U.S. military bases, it was later determined the military and the police were conducting joint urban training drills. Very little information was released to callers. The purpose for the drills was identified as “necessary to meet some requirements” that they have and “to prepare for some overseas drills” and “to make sure all of their equipment is in check”. Beyond that, the military spokesperson offered no apologies and no further information. They simply said the purpose for the invasion was “Classified.”

No problem, I do that sort of thing all the time too. To keep my skills sharp and my equipment in check I often launch surprise attacks on my wife by pointing my 45 caliber handgun at her head and firing off a few rounds of blanks. Sure, she cries like a baby and takes a few weeks to recover, but you know, you gotta stay sharp. Right? (Love you baby!)

The following is a clip from the local Miami news coverage on WSVN, Channel 7. Notice how the reporter tries to reassure his freaked out audience that this is all really perfectly okay. Sure, if you say so!

Meanwhile, residents in southeast Houston, close to Roberts Elementary School and the Carnegie Vanguard High School,  thought the worst case scenario had come to their neighborhoods. The local ABC television affiliate, channel 13, received “a ton of phone calls from local residents worried about what was going on.”

School officials at Roberts Elementary School were so freaked out they put the school on “lock down” status for a short time. U.S. Army soldiers along with others then moved in with automatic rifles and took over the school.

Local resident Frances Jerrals said, “When you see this you think the worst. When you hear this you think the worst. I felt like I was in a war zone because it was just non-stop. So I was terrified!” She called her husband at work and told him, “Don’t come home because it sounds like we are in a war zone! There are guns shooting and helicopters flying all around the house.”

https://www.youtube.com/watch?v=ZbawZoMncOM
With citizens hitting the deck, running for cover, locking down schools, and describing themselves as “terrified,” one might jump to conclusions and consider this to be an act of terror. But of course that would be absurd because this was our own government, you know, the good guys. Now if you want to know what a real terrorist looks like just consider our next contender.

A 5 year-old girl attending Mount Carmel Elementary School in Mount Carmel, Pennsylvania, was suspended from her school for ten days, charged with making a “terrorist threat”, and ordered by the school to receive a psychological evaluation. Her crime? She told her 5-year old girlfriend she was going to shoot her with her Hello Kitty Bubble Gun. The perpetrator did not have the dangerous weapon in her possession and had not even brought the gun to the school. Her crime was she threatened to shoot bubbles at her friend.

Amazingly, some parents had a problem with the actions taken by the school. After meeting with parents, school officials later reduced the girl’s punishment to only two days suspension. However, it gets worse.

When the little terrorist’s parents later tried to remove the child from the school to enroll her in a new school, the new school refused to enroll the girl because her permanent record showed she had committed a “terrorist threat.” The family is now planning to sue the school to have the act removed from their daughter’s record.

Family attorney Robin Ficker said, “The mother has tried to get the girl into another school since this time and they won’t take the little girl because of this mark on her record.”

Yeah, I think we got that part.

SO WHO WINS THIS CONTEST?

Who is the winner in this epic battle between the Blackhawk Helicopters and the Hello Kitty Bubble Gun? Which of these two heavyweights has inflicted the most damage on our country? Which has done more to convince Americans to sit down and shut up?

The Hello Kitty Bubble Gun also scored big points by charging an innocent citizen with a terrorist act for just talking about pointing a bubble g_n at another human being. Oh, so scary! Deduct one point because she was only 5 years old and did not have possession of the weapon at the time of the crime, which risked pushing this a bit too far (but apparently not). Score two points for tagging her permanent school record with an official terrorist act and requiring a psychological evaluation! Nice!

Of course, the Blackhawk Helicopters were not committing a terrorist act because they’re from the government and they came to help. Nothing to see here folks, just keep moving along. On the other hand, the young warlord who talked about blowing her friend away with bubbles is obviously a terrorist-in-training and a serious danger to society. Thank God she was caught before more people were hurt.

We’ll have to call this one a draw and hope for a rematch.

What’s even more amazing than the fact that both of these events happened is the fact that so far neither of them has caused any significant outcry from the public. Consider how far we have moved away from where our country began. Our nation’s founding documents laid out a very clear purpose for our government and very clear ground rules for how our country should operate:

It appears we have now swung completely to the opposite end of the spectrum. Americans appear to have accepted the idea of a bully government doing just about anything it wants to do without giving any advance warning and without offering any explanation and of course no apologies either. There appear to be no limits to what we will allow our government to do to us. If firing machine guns directly at American citizens is not offensive enough, what is?

Could it be possible they are just taking our temperature to see how we react? Could this be preparation for using our military forces against our own citizens? Nonsense! No way that could ever happen in America! Right?

Meanwhile, we are also not too bothered with innocent citizens being treated like criminals for even mentioning the G word, even when it’s the bubble G word and even when the criminal is a 5 year-old girl. How much more ridiculous does it have to get before we wake up and put a stop to the stupidity that has gripped the nation? Either we have become too afraid to take a stand against our all-powerful leaders or we have forgotten who we are as a nation. We are behaving like people who are fast approaching the day when we will lose the freedoms that our forefathers passed down to us at a very high cost. There’s nothing funny about that.