You are here: Home » Prophecies » Many are about to give birth spiritually to multiple gifts.
Share this post: 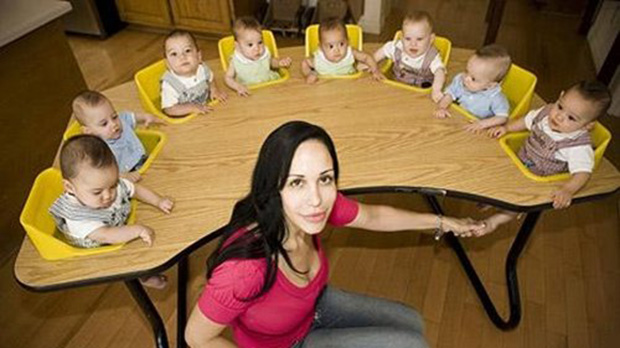 On the morning of September 30 2017, I was thinking about a woman named Nadya whose story was broadcast on every TV network across the nation almost nine years ago. The media called this woman the “Octomom” because she was pregnant with octuplets (eight babies).

A few minutes later, to my surprise, a news article came up on my computer showing Nadya with her eight children who are now eight and a half years old and in great health. She did not conceive through a physical relationship with a man but she conceived through artificial insemination.

The Holy Spirit is showing me that there is a spiritual impartation coming to believers. In the same way that these babies were not conceived naturally from a physical relationship, there are many of you that are about to give birth spiritually to multiple gifts and that is the reason why you are experiencing intense labor pains.

As I continued to read the article, I was surprised to see that Nadya chose Biblical names for all eight of her octuplets: Noah, Maliyah, Isaiah, Nariyah, Jonah, Makai, Josiah, and Jeremiah. She gave them all the same middle name which is “Angel”.She also chose her last name to be spelled as “Solomon”. The Holy Spirit is speaking through this sign and wonder. Jesus’ plan for your life will not be miscarried or aborted.

Before a baby is born, the mother has no idea what the baby is going to look like. She has no clue what kind of personality or temperament this baby will have. She doesn’t even know how big it is going to be and most of the time she don’t even know if it will be a male or female. Sometimes it is the same way when you are birthing something spiritually. You may not know the exact details of the gift, ministry or what it is that you are called to. What will it look like? How big is my ministry going to be?

When a woman first becomes pregnant she does not see the baby immediately. She has to go through a process for nine months. She eats the right foods to feed and nurture the baby from the time it is an embryo until it is ready to be birth into the world. The mother understands the developing process. In the same way many of you are pregnant with gifts and callings from God that have not been released yet. You are about to give birth in this season.

When the angel appeared to Mary to announce to her that she would conceive a child who is to be the Messiah Mary did not say I don’t know if its Gods will or if it is Gods timing. Neither did she say I am not ready for that or let me pray about it but this is how Mary responded: “Behold the maidservant of the Lord! Let it be to me according to your word.”

There are nine gifts of the Holy Spirit (1 Corinthians 12:8- 11) and nine is the number of the months of a full term for a woman to be in labor before the actual conception. Some of you are long overdue and need to have induced labor. Get in the birth position because you are about to deliver these precious gifts of the Holy Spirit.

Luke 1:38
Then Mary said, Behold the maidservant of the Lord! Let it be to me according to your word.” And the angel departed from her.

Thank you Elaine..so many words of a birthing.

From bible study.org:
The number 8 in the Bible represents a new beginning, meaning a new order or creation, and man’s true ‘born again’ event when he is resurrected from the dead into eternal life.

Like the Old Testament Passover lamb, Jesus was selected as the Lamb to take away man’s sins on the Hebrew day of Nisan 10 (April 1, 30 A.D. – John 12: 28 – 29). He was crucified on Nisan 14 (Wednesday, April 5 in 30 A.D.). His resurrection occurred, exactly as he stated, three days and three nights after he was buried, which was at the end of the weekly Sabbath day that fell on Nisan 17 (seventeen symbolizes victory). Nisan 17 was also the eighth day, counting inclusively, from the time Christ was selected as man’s sacrificial Lamb. All this bears record of Jesus’ perfect sacrifice and His complete victory over death.

Boys were to be circumcised on the 8th day. The number 8 symbolizes circumcision of the heart through Christ and the receiving of the Holy Spirit (Romans 2:28 – 29, Colossians 2:11 – 13). Those in Christ are becoming a new creation, with godly character being created by the power of God’s Spirit (2Corinthians 5:17, Ephesians 2:10; 4:23 – 24).

After the 7 weeks of the spring harvest, the next day, the 50th day, is Pentecost. This day is also the eighth day of the seventh week. This 8th and 50th day combination pictures the first resurrection when the saints will be raised from the dead and made immortal (1Corinthians 15:20 – 23, John 3:3 – 12, Revelation 20:4 – 6). After the 7 days of the Feast of Tabernacles there is an 8th day, called the Last Great Day.

Note that Sophie the AI wore a no. 8 t-shirt at an interview – signifying a “new order”. New world order

Wow! I’ve had a couple of dreams recently of being pregnant and in labor. I figured it meant “birth” to something new in my life. Interesting. Thanks for sharing this.

when my marriage is ressurected after being dead for 21 years as my wife divorced me nearly 20 years ago.God showed me that He is going to use us in some mighty way.This artical clicked with me as I have never known any details of how He is going to use us..At the moment things look immpossible as they have for nearly 22 years.but just recently I have read so many of the dreams and visions from z3news about coming into a new season.God is saying there is more to come.Hallelujah!I could say alot more but I’l wait until after the breakthru comes

Julia cadag
Reply to  ARE

GOD’S PEOPLE WILL BE BIRTHED

at first I didn’t know what it meant but soon after I received confirmation.. one after another ..

Lord bless you mightily and for your enduring patience

Oh wow I had a dream Just a couple weeks ago I was pregnant and in labor. I’m well beyond those years physically so this is very exciting for me. Thanks for sharing this awesome revelation Elaine !