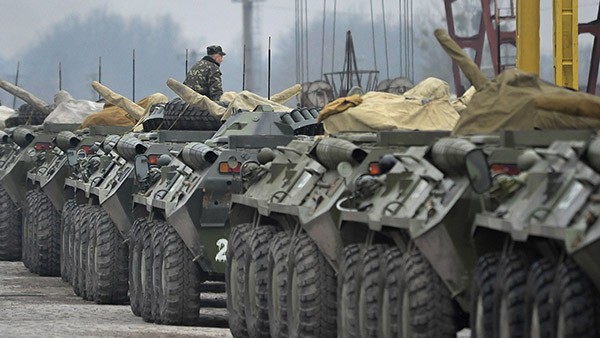 Even though the 2016 National Defense Authorization Act (NDAA) has already been signed into law, discussions are continuing about increasing the level of military aid to Ukraine.

A letter sent yesterday, November 18 2015, urges four leaders of Congress to increase aid to Ukraine to $1.2 billion. The letter was sent from former Ambassadors, military leaders, and officials in Democratic and Republican Administrations urging Congress to enhance and expand U.S. economic, military and humantarian assistance to Ukraine.

The timing of the letter seems late to me because it comes after Congress spent months hammering out the details of aid to Ukraine as part of the 2016 NDAA. However, it shows the issue is not done yet, at least in the minds of some people. The original version of the 2016 NDAA approved by the House included $200 million in military aid for Ukraine. The Senate later increased it to $300 million, which is where it remained in the final bill. So it seems unlikely to me that Congress would take this issue up again so soon, but perhaps there are other ways to get it done.

The letter was posted on the U.S. Ukraine Business Council (USUBC) website and addressed to the following four leaders of Congress, all of whom oversee appropriations:

In addition to $3 billion in loan guarantees, the letter urges Congress to increase aid to Ukraine to $1.2 billion, which includes $1 billion in military equipment and training support plus $200 million in additional immediate humanitarian aid.

This proposal caught my attention because it is the same dollar amount I was shown in a dream on March 1 2015. I was shown a sign to watch for that would precede a sudden economic collapse, which was a proposal for $200 million in military aid would be given to President Obama for approval and he would then increase the amount to $1.2 billion. I did not see any involvement from Congress or anything to do with the NDAA. I saw it coming from within the Obama administration, so that is what I am expecting to happen. I shared the details of that dream in my previous post, The Event Before the Event.

Even though this letter was addressed to leaders of Congress, perhaps it will find support within the Obama administration. The entire letter is shown below.

We write today as individuals with deep expertise on Ukraine, many of us former Ambassadors or officials in Democratic and Republican Administrations, to urge an expansion of U.S. assistance to Ukraine as part of the final negotiations on fiscal year 2016 appropriations.

On the Maidan in Kyiv, hundreds of thousands of Ukrainians stood up for their country’s European future in the face of bitter winter weather and heavily armed police who killed more than 100 protesters.  In the year and a half since, Ukraine has made important progress on several fronts, including holding free and fair national and local elections, instituting political, economic and governance reforms, and negotiating a landmark debt renegotiation.  But as Ukrainians have worked to create a new, Western-looking government, they have been confronted with a multi-front war from Russia that continues to threaten Ukraine’s sovereignty and independence.

The support that America has provided to Ukraine since 2014 has been vital in providing a foundation for the people of Ukraine to build the vibrant democracy that they demand and deserve.  But Ukraine’s stability and its sovereign role in a united Europe remain under siege.  Accordingly, we believe a redoubling of assistance from America and our European allies is vital at this time.  We urge Congress in the final FY 2016 funding negotiations to increase U.S. assistance and support by providing:

The potential for a prosperous and democratic Ukraine is limitless.  With strong U.S. support, an independent and free Ukraine can thrive as a democracy in the heart of Europe.

Moscow’s ambitions go beyond imposing its will on Ukraine.  It is in our national interest to stop Kremlin aggression in Ukraine and to demonstrate the falsity of the Russian narrative equating democracy and reform with chaos.  We urge action on an expanded assistance package to help Ukraine achieve this bright future.

Thank you for your consideration of our views.

Amb. Paula Dobriansky, former Under Secretary of State for Democracy and Global Affairs

Michele Flournoy, former U.S. Under Secretary of Defense for Policy

Barry Jackson, former Assistant to the President and Chief of Staff to the Speaker of the House

I am also watching another upcoming proposal, which is coming from the Pentagon recommending increases in the number of U.S. troops deployed in eastern European nations. It will be sent to President Obama after it is finalized by the Pentagon. A decision is expected before the end of the year, although no dollar amount has been announced yet. I shared the details about that proposal in my previous post, More U.S. Troops Could Soon Be Deployed to Eastern  Europe.

So there are two possibilities for this event to happen in the near future. In the meantime, the watch goes on. Thanks to all the Z3ers who have helped report these events!

“This reaffirms the longstanding defense relationship between the United States and Ukraine and brings the total U.S. security sector assistance to Ukraine to more than $1 billion since 2014,” Klinkel said in a statement.

The CIA did a regime change in the Ukraine as part of the neo-con’s plans to surround Russia with our missile bases and crush her because they threw the Rothschilds out and now have zero debt. Trump understands how Putin turned his country around after the Bushes made it collapse in the 90’s. No LGBT’s, strong borders, built 16,000 churches, 85% approval rating by the people. The Globalists want WW III and a 90% world population reduction to form their Godless NWO. Russia and US cooperation is directly opposed to the NWO’s plans and that’s what explains the Left”s demonic frenzy of late.

This started in Dec. not sure if it has legs or not. I’m still looking into it.
https://www.middleeastmonitor.com/news/americas/23091-official-us-to-provide-military-aid-worth-200-million-to-peshmerga-forces

Thanks Darin! I saved this article and will keep watching.

James,
Looking at FAZ chart last Dec. 30, 2015, it was a $39 a share. I think yesterday it was at $53 a share. So if a person would have purchased $39,000 of FAZ back then and sold it yesterday, they would have made $14,000, correct? But…. if you sold a lot of it real quick and then while your getting ready to repurchase you could get bit bad if there was a quick crash and you could not contact your broker. I’m hanging low and waiting. James in your dream you and your wife were disappointed that you had not positioned yourself in FAZ before this event, because your broker could not be contacted. A person selling at the wrong time might have to duck a flying skillet from their wife. (LOL) …….My wife has never thrown anything at me yet.
God bless.

Hi James,
I’ve been busy for some time now and have missed out on time here at you wonderful site. I didn’t even have a computer for a while.I have not heard of the 1.2 billion for a while now and was wondering if you are still tracking anything in the news.
God bless I hope all is well.

I am still waiting for Obama to authorize $1.2 billion in military aid as the event before the event.

Putin has just ordered 100,000 troops to the Baltic according to “What Does It Mean” website. So we might not have to wait long.

Congress and others have been calling for over 1 billion in lethal aid for a while now. Obama has been reluctant. This was from February. http://www.timesofisrael.com/top-us-house-reps-back-1-billion-in-ukraine-lethal-aid/ God bless!

That would be cool if Dow closed at 17,956.26 today and markets went the other way next week. Just more wishful thinking lol.

I was thinking the same thing. It would be nice to hit that number, get confirmation on the 1.2 billion, Hit a new high on the USD/CHF, hit a new 52 week low on FAZ, Have china rebuke obama on military issues, all on the same day, all before thanksgiving day. Then there would be no guessing.

My newest update on the NDAA from yesterday shows it not signed after the Veto, Looking for confirmation.
thanks for the heads up!

This NDAA prediction, to be valid, has still to be fulfilled before the end of the year, James?

There is no NDAA prediction. I never saw anything to do with NDAA. I saw Obama authorizing a proposal for military aid that started at $200 million and he increased it to $1.2 billion. Regarding the timing, please see my latest post in which I saw a one month delay. Here is the link: http://z3news.com/w/one-month-delay/

This is the counter move to Russia in Syria.In order to raise the amount there needs to be a demand and justification.Hence this letter.