You are here: Home » News » Jesuit Agendas » Health Care News » Bill Gates: “It is fair to say things won’t go back to truly normal until we have a vaccine that we’ve gotten out to basically the entire world.”
Share this post: 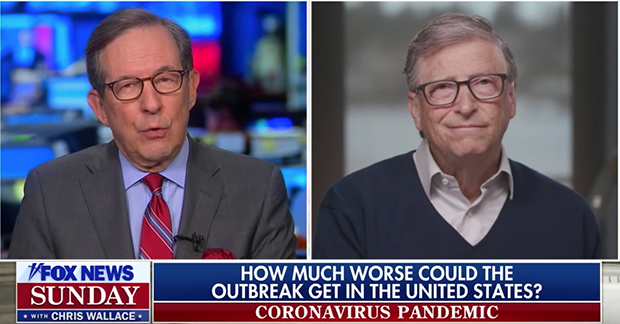 The 12-minute video at the bottom of this post shows Bill Gates appearing as a guest yesterday on “FOX News Sunday” discussing the coronavirus with host Chris Wallace. Some of his comments are transcribed below:

The coronavirus is “a nightmare scenario because human-to-human transmittal respiratory viruses can grow exponentially.”

If we had kept on going to work, traveling like we were, you know, that curve would never bend until you had the majority of the people infected and then a massive number seeking hospital care and lots of lots of deaths.

So, you know, we’ve got to use quarantine, which is an old thing back from the days of the plague as our primary tool,” he said. “Fortunately, if we use that well enough, we should, towards the end of this month, start to see those numbers level off. And then if we continue country-wide, and we’re testing the right people to understand what’s going on, which is not the case yet, those numbers will start to go down. And then we can look at some degree of opening back up.

It is fair to say things won’t go back to truly normal until we have a vaccine that we’ve gotten out to basically the entire world.” (Source: Fox News YouTube Channel)

History shows false flag events have been used repeatedly to manipulate public opinion for the benefit of evil people behind the scenes, enabling them to gain increased public support for their agenda, including wars and other tragic events. The scriptures confirm this by revealing Mystery Babylon is responsible for the deaths of all who are slain on the earth.

And in her was found the blood of prophets and saints, and of all who were slain on the earth.” (Revelation 18:24)

To clarify, this verse is not referring to all who have died, but specifically those who were butchered, slaughtered, killed or wounded (from Greek definition of sphazō). Although this claim contradicts the version of history we were all taught in school, it aligns perfectly with the true facts of history, which have been purposely hidden from us but are available to anyone who takes the time to study. Unlike the history textbooks we studied in school, the Bible is the most reliable and most accurate history book ever written.

Mystery Babylon is more dangerous today than ever before due to advances in technology which have empowered them to implement more deadly schemes than was possible in any previous generation. Combining that with mega-mergers of media corporations, which concentrated over 90% of all media outlets into the hands of just six corporations, Babylon now has far more powerful tools for manipulating public opinion than ever before and the facts show they are using the media to indoctrinate us with their lies.

So, whenever we see large numbers of people suddenly dying, I think we have good reasons to believe Babylon is behind it and good reasons to be skeptical of the narrative presented by the media and the solutions presented, especially a mandatory vaccine for the entire world. Instead of being the ultimate solution, I think it is more likely the ultimate purpose for the virus, to make us willing and even eager to receive the vaccinations, which are already being used to inject people with nano technology for tracking and surveillance purposes, giving Babylon greater control over the recipients. For more details, see my recent post explaining how the United States Defense Advanced Research Projects Agency (DARPA) is already doing this.

For all these reasons, I strongly recommend refusing any kind of vaccines.

Hi James, Here is a video that has another implication. To make us turn from God… It is a 5 minute video that our government was thinking about a vaccine to make us “less fanatical”.

I was not going to add another comment but looking this am & found this account of Henry Kissinger/& Bill Gates ,/ Fauci- men who planned lockdown of entire world.! call for mass vaccination & global Govt.

B.G. as the emerging world power person/ spokesman.. behind UN agenda…to blockchain digital currency AI
and its part of identifying every single person on the face of the Earth.. .

“the dear leader,” is up to No Good… As expected:

Note how Bill Gates is the self-appointed “Vaccine” spokesperson for the world & yet has NO medical training.

Hello Everyone… pondering all recent posts & all the comments….plus all James has mentioned re Jesuit –

black Pope connections to many high places.F.M. front men etc. .. men in High places then came across this short video

re Jesuit Agent Dr Fauci..goes back to 2017 …here what he has to say re there will be a surprise outbreak..

Pieces of a Gigantic end time game puzzle are coming into focus…. eyes to see & ears to hear what the Holy Spirit is showing his people..just too many connections.

Thanks for sharing this video Anne. I included it in a new post. Here’s the link:

My pleasure James …Praise The Lord. All Glory To Jesus.

I knew that Bill and Melinda Gates were trouble when I witnessed Obama awarding them with The Presidential Freedom Award medal for their philanthropic work. It opened my eyes to who Bill Gates really was when in 2016, our then President fastened the clasp on the medal around Gates’ neck. .The ceremonial gesture gave me chills. We know who the true driver is for the rollout of the vaccine and it’s nefarious agenda.

Interesting info. I have only become aware of Bill Gates activities over the last few months.
Satan as we know, portrays himself as an angel of light, This is really is the age of deception and we must check everything.
Matthew 10 v 16 KJ version – “Behold, I send you forth as sheep in the midst of wolves. Be ye therefore wise as serpents and harmless as doves.”
best regards
Phil
sp500 index now 2751 Will it hit 2792???

If you are new to the truth regarding Bill Gates, this TedTalk he gave in 2011 might be of interest! Gates has repeatedly stated his true agenda, in public, and rather plainly. But it hasn’t “clicked” for most people, because most people don’t think global depopulation would be the goal of any human – unless they’re Hitler or Stalin. That denial seems to be fading away, which is why I feel compelled to scream from my rooftop about all of these past examples. Bill Gates is the Chief Eugenics Officer, for the NWO.

Vaccines are poison and mandatory vaccines are the final precursor to the RFID microchip which is the mark of the beast and is also injectable. They want to incorporate them both so the RFID will track your vaccine regiment, allow you to buy and sell, and the vaccines and what is happening in the world give them a compelling reason for them to chip everyone and condemn them. We must resist even at all costs. Prepare to rely soley on God and to leave society for the wilderness (woman in the wilderness Revelation 12). I was shown by God they will make vaccines mandatory in Australia and first by fines then by arrest on the spot. God bless you. Christopher.

Christopher,
Do you have any idea of the time frame that this vaccine will become mandatory in Australia?

No I do not, but I know it’s coming, and I will not accept it, so I am preparing myself.

Christopher, since Australia is a Christian nation and many congress members are Christian too. They need to know this info about RFID inside vaccine and totally reject it in the parliament for God sack, right? Somebody must share to your nation congress about it!

Not sure of where to put this but please pray for the Prime Minister of the UK, Boris Johnson, who is currently in intensive care for Coronavirus treatment. A few days ago, my brother told me of a prophecy that Boris would lead the UK out of Europe but his reign will be cut short. Today, Boris ended up in intensive care. We have been praying and I believe that the God Who have Zechariah 15 more years can spare Boris. Please pray for him. Thank you.

Bill Gates is a very convincing , empathetic and confident speaker able to motivate people to do what he wants. Regretably millions will take a vaccine and associated nano chip without a thought for the eternal ramifications . We need to be profoundly wise. I see employers sacking long term faithful employees who refuse these vaccines. Thanks James again . It is elementary that the rise of Joseph’s within the z3 community is critical to support Christians across the world who are financially damaged and seriously affected by what has come and is coming,
God bless
Philip

School children and college students may also be banned from schools and colleges unless they are vaccinated and microchipped. The implications of mandatory vaccination are massive if it does come.

Check out Israeli News Live on YouTube. The hosts show you an interview with a doctor who says medical personnel are being told to put cause of death for anyone in the hospital as Corona Virus o the numbers will go up to keep scaring people into submission. Well worth listening to, but be prepared to get mad after you listen. We’re being put into submission without a fight. Come quickly Lord Jesus!