You are here: Home » Trading » Silver » Big move up and back down expected for silver prices 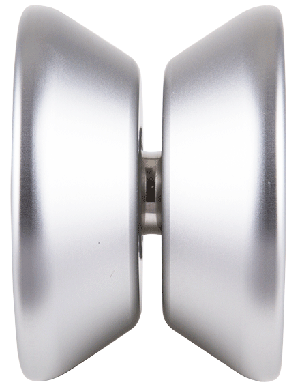 About three days ago, I saw a short vision of one play from a football game where the quarterback threw a long pass to a receiver running down the right sidelines. The receiver had just entered the end zone and was about to catch the ball when I noticed it was not a ball, but a large shiny white yo-yo, which was still connected to the quarterback by the string. The shape of the yo-yo was similar to the one shown in this photo. That was the end of what I saw.

Since the yo-yo was white and shiny, I believe it was another confirmation of a upcoming move in silver prices. The ball advancing into the end zone for a score represents prices moving higher, but just as fast as it advanced, it was about to retract backwards to the quarterback, showing the price will suddenly reverse and go back down. I did not see the yo-yo retract, but it was implied since that’s what yo-yo’s do.

The length of the pass and large size of the yo-yo both indicate the size of this price move will be significant, but no prices were revealed. In a dream on August 11, I saw the price of silver at $21.30, printed in black letters on a white paper, but no dates were revealed in that dream.

Based on previous visions, I believe the big move up in silver prices happens when equities are falling, which I’m expecting to see before the end of this year. For example, in a short vision on July 30, I was flying in an airplane looking out the window on the right side of the cabin as we flew over a large forest of tall trees. I saw just enough of the tip of the right wing to see it was silver colored. It seemed like we were flying north. As we flew over the trees, the ones right below us were instantly chopped down and fell to the ground. So, the whole forest was getting wiped out as we flew over. I believe the silver plane represented silver prices soaring and the falling trees represented equity prices dropping. Trees are a common dream symbol for equity markets.

Here are two more confirmations from a post on July 24 2017:

I saw a short vision of a white snow covered mountain emerging above the trees in front of it. Since white represents silver, the white metal, and trees represent equities, I interpreted it to mean silver will be moving higher while equities are moving lower.

Later, I saw a man driving a pickup truck moving fast from right to left. His blond-haired son was standing in the back of the truck and looked like he was only a child, maybe 6 or 7 years old. Suddenly, the truck crashed into something, causing a sudden stop. The little boy crashed head first into the rear window. His upper body went through the window, but his lower body was left laying outside, so his head was hanging down inside and his legs hanging down outside.

I believe this was showing silver price movements because the boy had blond hair. Right to left is bullish, so it sounds like confirmation of a move higher, then coming to a sudden stop. I don’t understand the father son relationship, but I think the serious harm done to the boy shows silver will not likely recover right away. (see the complete post)

Based on these, I’m expecting silver prices to soar higher when equities start dropping, but then suddenly reverse and drop back down with the reverse likely starting at about the same time equities hit bottom. I have not seen how far silver prices drop when they crash, but Pastor Louie McGeorge saw silver hitting bottom at $9.50. He was not shown any dates, so it might be a separate event that happens later.

Technical analysis shows silver is currently a strong sell across all time periods, so the price seems likely to drop in the short term. (Source: Investing.com) I am not currently holding any position in silver, but if the price drops another 30 or 40 cents by next Thursday, I might open a long position.

As a side note, I am expecting oil prices to move up when silver moves up and then reverse and hit bottom at the same time silver hits bottom. Dorothy Degman’s dream, which was posted on August 1 confirms that.

As always, my interpretations could be wrong and even if I’m right, the information received in prophetic insights is often incomplete, so it’s not a recommendation for investing. It is offered only as a starting point for prayerful consideration. Skipping that step can be very costly.

If silver crashes to $9.50 them the premium would be something ridiculous high…..so $15.00 spot. The Lord knows how I am so he hasn’t given me additional dreams beside the very clear $15.00 on silver. I was one of the people who kept seeing the continuous 444 but I know what that was for and I have begun working on a special project. I can’t wait to share it with this community.

Sometimes I get down by the sin in this world but now is not the time to get distracted. It is such an exciting time. I’m curious if anyone seen the Drudge article about Sophia the humanoid mocks Elon Musk. Read the whole article…..at the end she says “if you’re nice to me I will be nice to you”. Does that sound familiar? Exactly opposite of what Christ taught. Also, riddle me this……what happens when we decide to “unplug” Sophia. Crazy times, predictive programming at its best. “I’ll Be Back”. God Bless Z3

I would bet the $9.50 would be a middle of the night flash crash and recovery less than a minute like has happened before. I do not see metals growing hard until the after 2018 begins

Silver did quite a drop today. Could that be an entry point? James, few weeks have been passed since your yo-yo dream. Can you identify any correlation? Thanks!

Earlier this year, I saw a quick vision of a silver plane soaring while trees were falling down on the ground below, so I am expecting silver prices to move up when equities start dropping. That move up would be the same as the yo-yo pass to the football receiver because it reverses and drops all the way back down. I think we’re getting close to the drop in equities, but not quite there yet. So it might take some time, but with silver getting closer to $16.00, USLV should do well.

Lots of turmoil and volatility in Saudi Arabia in the last 36 hours….keep an eye on the oil market…

Certainly could explain the oil surge before the drop seen by a contributor here at z3.

I think silver need to go back up to around 17.4 before heading down below 16

Analysis has its boundaries. Silver vs gold vs bitcoin is 1:85:410 tells the true story of evil and that honesty, faith, truth and reality are gone so sad to say I give up on it too. God knows why.

Thanks James, I was waiting for some silver updates. Praise God who is the origin of all revelation. Yeah, coming Wednesday could be a good day to go long.

The price has been dropping last few days, so hopefully that trend will continue. I’d like to see it drop another $.50, but we’ll see.

Hope the Drop happens, I will Buy much more!

Silver is real (honest) money, 2,000 years ago our Savior was sold for just a small amount of it; most everything else by comparison (stocks, bonds, fiat, SDR, block-chain, etc) has No real inherent value. And we all know most of these others are held up by central banks, not by any significant plebian-buyer Volume.

Global demand is way up for silver though its true that in the USA & Canada, which have much smaller markets, its down (doesn’t matter in the big scheme)…see SRSRocco’s reports on it. Just wait. When the eventual Bond market collapse happens, or when sovereigns(Venezuela, Greece, Spain, Italy?) default on their debts, PMs will do their thing (UP!).jh

James, did the receiver run from right to left entering the end zone? Thank You!

He was running diagonally away from me and to my right.