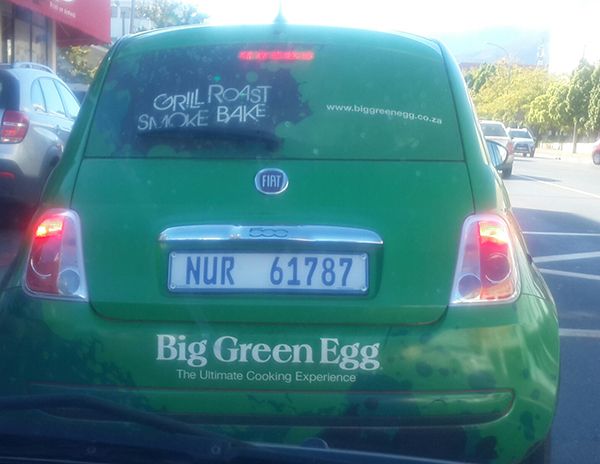 I never cease to be amazed at the creative ways God speaks to us. I went for a drive yesterday and on the journey I was praying in the Spirit and it became very intense and powerful. Suddenly, I saw that RDD rocket in position and the engines under it were firing. (RDD is the symbol for Reddcoin, a crypto currency coin)

The more I prayed, the greater their activity became and I realized we need to pray much in tongues in this week, under the direction of the Spirit to participate in the launching of this project with supernatural power.

Then in front of me, I saw a little bright green car (shown above) and as I got closer I saw that written on the back were the words ‘Big Green Egg’! What next? 🙂

Immediately, I was reminded of the nest with the 3 pastel eggs that I saw also connected to RDD. I realized the Lord had provided a sign of a BIG green egg ie. finance, coming in. Here’s what I posted in a comment on 12th February:

I saw the RDD wallet lying open. It looked like a round bowl with the RDD in it. Then it changed into a nest with 3 pastel colored eggs in it, pale pink, pale blue and pale yellow. It made me think of Easter eggs.

I thought, Lord, let me get a picture of that car because no one will believe me. So I drove after that little car, but it was going at great speed for such a small car and every time we approached a traffic light, it turned green. There were green lights all the way!!

So I started to pray that God would stop that car so I could get a picture. Finally, when we reached a nearby town, it stopped at a light and I snapped a picture, but while I was chasing it (and trying to keep to the speed limit LOL) the Lord said to add up the numbers on the licence plate, 6+1+7+8+7. They came to 29. That’s the day after blastoff on the 28th. April 29 is also the first day of the second chance Passover, the 15th Nisan in the adjusted Passover dates (based on the dates God revealed to Joanne).

So, my brothers and sisters, I think the Lord is saying there is a large nest egg coming your way at great speed on the 29th.

Just after I took that photo, I drove under a banner which spanned across the road and it said “22 years ago”. That would be 1996. I believe God is going to be giving recompense for all we have lost in the last 22 years. Interesting that yesterday was also the 22nd!

The NEWS before the news. You got that right James. Tech investment bank GP Bullhound warns of a 90% crash later this year. Then dynamic growth for the few survivors with bitcoin forecast to $25,000 by years end.

Do you have to go thru the identity verification process on bittrex to trade. Thanks

I was in the middle of cleaning up my kitchen when my four year old daughter brought me this “suprise picture” she colored for me. It just so happens to be a rocket blasting off. And the only color she used was RED.
…

I attached an image of the picture! Hopefully it’s viewable. 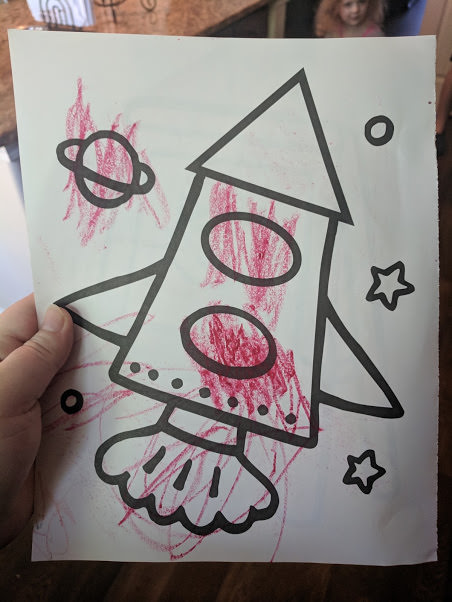 Besides the 2 red ovals on the rocket, here are other interesting clues to this picture:

2. During the dawn of May 4 to 6, Saturn can be seen in relation to Sagittarius as Saturn is to the rocket in the picture.
http://www.skyandtelescope.com/observing/this-weeks-sky-at-a-glance-april-27-may-5/

3. The shape of the symbol for Sagittarius is very similar to a rocket.
https://www.google.com/search?q=sagittarius+symbol+images&rlz=1C1SFXN_enUS740US740&tbm=isch&tbo=u&source=univ&sa=X&ved=0ahUKEwjayeSz9t_aAhWDjVkKHQu3D6oQsAQIKA&biw=1366&bih=637

4. There are 7 dots on the rocket which could be symbolic of the 7th day of Passover.

Marcio, (Christine and James) get a load of this….I’m down in PEI near Christine’s wealth transfer confederation bridge, so I decide to run the program I have for the constellations (after reading your above insight). From where I am looking towards the bridge….I have the constellations of Virgo and Leo, the Pink moon and Jupiter (King planet) directly over the wealth transfer bridge area. And at this time they are directly over the Serpent constellation 🙂 Niceeee!!

John, EarsToHear, and Richard, thanks for the encouragement. We have to keep enduring and waiting patiently for the Lord. Stand at your posts. God bless.

Blessings Marcio. Is that a painting of one of your pets?

Yes. It’s a closeup of a portrait I made of my greatly beloved female black labrador mix Charlie.

Now that’s the way it’s supposed to be. Thanks John.

wow! How about a screenshot?? 🙂

Could the pale pink, pale blue and pale yellow eggs you saw be Moons? The Pink moon mentioned above, the last blue moon for 2018 was 31 March.

I never thought of that. Perhaps, but what would the yellow moon refer to?

“When the moon appears orange or yellow, it simply means that the observer is looking at it through more layers of atmosphere.”

I did take some with my phone, I’ll email them to James-I don’t know how to upload to this site…

I think your 4-year old daughter wins the prize for best Reddcoin prophecy. A surprise blast off is a great way to summarize all the other dreams and visions shared here. Thanks for sharing.

Hey Z3 this is for the bargain hunters. I have been running fibs on RDD the next lower Fib level is about .00654. Not sure if it will hit but a buy order near that is free.The one after that is .0059.

Thanks for sharing those great targets Ed.

I like your strategy of placing orders at the bottom of the trading range.

Hey Ed,
Please explain your numbers to me. Your buy order amounts on Cryptopia are much, much smaller amounts than the daily Btc/Rdd low price. Where do these come from? Thanks!

Bill F,
Sorry should have clarified it better. The first set were RDD price points in USD. The second set with all the zeros are the BTC pairing ratio. Because RDD is so low in value the BTC ratio only uses the 2 last numbers. Yesterday it was mostly trading at 79-81. Well I am looking for under value . I know it literally is splitting pennies but it is fun to me to find the bargains. For me it is more about the RDD coin amount than the actual cost of the trade.If I can get another 20 -60 RDD coins for every $1 low buy that is a huge difference when RDD spikes.

Got it! Still learning. I like your approach. Like planting tiny mustard seeds which become massive trees in due season with patience. Thanks for your ideas Ed. You have a teaching gift brother.

1996+22 run together equal 29 also! This is nothing short of wild! I’m rolling in the floor for all of you who sought God for direction. His works are Marvelous!

Donated some btc. Everyone should do the same websites cost money and time to run.

Agreed. I can’t wait to give once I exit my positions 🙂

Thanks for supporting Z3 News Antonio.

Can’t help myself here; “the big green egg” is actually a ceramic smoker. It’s mega expensive, but its devotees love it for great outside picnics.

I think Christine understood they weren’t driving around to remind her of her Easter egg vision. She’s operating by faith here.

Hey James look I got my pic working! Thanks for the help!

That’s awesome Colton. I wish more people would add their photo. It’s very easy to do, just use the same email address used here on Z3 when you upload your photo at https://en.gravatar.com

Your photo will then appear wherever you use that email address.

Funny one bert. Makes me wonder if it’s really a great cooker 🙂

Dear Christine, we need to be careful with Sunday trading, because some exchanges like to go on “maintenance” on Sunday

I believe the spike will happen on the day before, 28th, but the nest egg will be gathered into wallets etc for conversion to fiat from 29th. I would have sell orders in place by Thurs/Fri latest.

James, your Fat B here. Are you going to sell reddcoin when it hits around $2 or are you going to hold until $5? Also, do you think uvxy going to $90.62 is before or after reddcoin jumps in the dollar range?

I am working on a new post to explain why I have set my Reddcoin sell orders at $2.22. In the past few days, we have received confirmations there are four spikes ahead. I recommend seeking God for confirmation, but it appears the first spike only goes up to about $2.40, then drops to $1.20.

Regarding UVXY reaching $90.62, God has not shown me any dates. I have been tracking patterns in SPX, especially with the formation of a large W-shape. My current target date for bottom of the crash is June 22, so that would be when UVXY reaches the next top. God has not shown me any dates for Reddcoin either, but I am watching and piecing together clues that seem to be saying it happens before June 22. We’ll see.

Hey James, just got back from PEI. I read this post enroute back home and quietly thought to God, let me know what you want me to do…
My final odometer reading was 29220, there’s the three “2’s” then I come into the house and get caught up with my older son who stayed back. He works at a high end car dealership and was telling me about one model in particular and how there were only 222 of them in Canada. ha ha! looking forward to reading your post!!

Thanks for the update John. I was not able to get the Reddcoin update written today. My days all seem the same, like groundhog day all over again, because my time is being consumed by many other things. Will try again tomorrow, but I can already see it will be challenging.

Bless you brother, I know you have a busy life!!

John, your odometer also starts with “29.”

Just curious to see if step 1 is complete of God’s plan. ERC20 token trading has been stopped by some exchanges because of a bug in a line of the code of several tokens who apparently copied and pasted the smart contracts and then changed what they needed to customize their contract. No one caught that the bug was there until now. Deposits and withdraws are going to verified on a case by case basis…….RDD IS NOT an ERC20 token….interesting!

Teresa, do you know if all ERC20 tokens are affected by this bug or only a few ?

Was wondering the same thing last night as I was reading up on it.