You are here: Home » News » Financial News » Why the Federal Reserve Bank is a Big Fat Blood Sucking Tick

This year the Federal Reserve Bank is celebrating their 100th birthday! Happy Birthday to the Fed!

Oh, you haven’t heard about it? Well, they do like to keep a low profile. Oopsies!

And guess what else they’re celebrating… 100 years without an audit! Not a single report card ever. Yeah! What a deal! No pesky performance reviews or job evaluations to worry about. That just means more time to do their job looking out for you and me. I feel better already.

Perhaps they should have an audit and a report card at least once every 100 years whether they like or not. I know, that is so harsh and demanding, but since they are spending $1.8 trillion this year alone to purchase the debt of our federal government, and since they earn a nice return on that paid for by American taxpayers, it just seems like there should be some sort of accountability. Am I being too mean?

Our founding fathers warned us against having a central bank. Here is what one of them had to say about it:

“I sincerely believe that banking institutions are more dangerous to our liberties than standing armies. The issuing power should be taken from the banks and restored to the people to whom it properly belongs. If the American people ever allow private banks to control their currency, first by inflation then by deflation, the banks and corporations that will grow up around them will deprive the people of all their prosperity until their children will wake up homeless on the continent their fathers conquered.”    -Thomas Jefferson 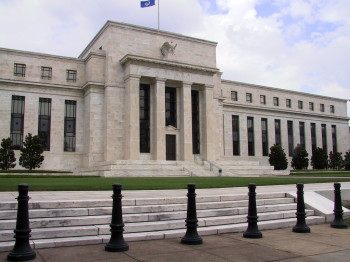 Ignoring this warning, President Woodrow Wilson led the charge to establish the Federal Reserve Bank in 1913. Now one hundred years later, this “private” institution is sucking the life from our country in the form of guaranteed interest payments from our federal government, paid for by tax paying citizens. So there is a massive transfer of wealth from American taxpayers to the Federal Reserve Bank.

So how much money is the Fed collecting from taxpayers each year? Based on their annual purchase of $1.8 trillion in treasuries in 2013, the will earn about $34 billion from their 2013 purchases. This assumes their average maturity is 10 years, with an interest rate of 1.92%, which is the current rate today. Since the start of their “Operation Twist” program in September 2011, the Fed purchases primarily treasuries with longer maturities, between 6 and 30 years so an average of 10 years is close enough to make the point.

How big is $34 billion? To put it into perspective, here are some benchmark comparisons:

Earning $34 billion per year is a lot of money. With that much money, you could buy the NFL, the school textbook industry, and the nation of Iceland, and you would still have $3 billion to spare! And the Federal Reserve earns that much in just one year! Imagine what they can buy next year and the year after that.

Considering the United States federal government is already $17 trillion in debt, the burden of paying an extra $34 billion per year to the Federal Reserve Bank is insane. Especially when our country operated just fine for the first 124 years without it.

But for the Fed, the massive debt of the United States government is not a problem because it means the Fed earns more money from larger interest payments on larger purchases of treasuries. Might there be a conflict of interest here?

This organization keeps their records secret from public scrutiny. They successfully lobbied Congress to structure the laws so that they cannot be audited. American taxpayers get audited but the Federal Reserve never does. So we can only guess what they are doing with all of their money because we will never see any of their records.

The Federal Reserve’s job is nearly done now. Since the collapse of the housing market in 2008, the Federal Reserve initiated Quantitative Easing Programs, which is a fancy way of saying they started printing boatloads of money to purchase the debt of our federal government and postpone bankruptcy. Their money printing has become the primary driver of the stock market and has made normal free market factors almost meaningless to investors. More money in circulation has also driven the value of the dollar down even further. We are now approaching zero value.

The Federal Reserve Bank is like a big fat tick sucking the wealth from American taxpayers in the form of interest payments on the national debt. When the patient finally drops dead, the American taxpayers will be devastated. Their wealth will be destroyed, but the Federal Reserve Bank will be in great shape because their wealth is protected in stockpiles of precious metals, which they have purchased with taxpayer dollars. Those stockpiles will assure their survival so they can offer their services to the next unfortunate victim.

Our founding fathers were right. Our central bank needs to go now before it is too late for our country. So happy birthday to you Federal Reserve, and may it be your last!

All the presidents who have ever dared to stand up against these mob-banksters have gotten assassinated: Lincoln, Garfield, McKinley, Kennedy and an unsuccessful attempt at Jackson. All good men who were true patriots for God and country and not using their high office to profit for themselves like so many now who are in office prostituting themselves like the lowlife that they are, and think they are getting away with it because they can look at you straight in the eyes and smile through every lie to make them look innocent as pie when underneath they are festering pools of putrid waste. Take a look at my other comment if you want to learn more.

Just discovered your site and starting to explore. Good article, but can you post some of Bill Still’s work here to serve as a true testament to your Zeal for 3 and get the word out? There’s power in unity. He really gets into the history and analysis of the sinister plan of these plutocrat bankers in operation from the very beginning, vying for total control of our republic and causing so much misery and destruction in the process. But more than that, he gives a road map as to what we can do as a nation to fix this mess. We are under attack from all sides; our rights, our health, economic well being, and social mores are being pummeled mercilessly. These people will stop at nothing for total dominance.
Here is a good summation of the problem at hand:
https://www.youtube.com/watch?v=KoYreMDOG2g
Cheers!

President Kennedy was killed right after he made a speech saying he was going to close (or change) the Federal Reserve Bank. See on Nita Johnson’s site: World for Jesus (GOE – Gathering of the Eagles) Reckon our Muslin Pres is a coward or just plain mean! Now, if they just don’t follow a Muslin Pres with a witch (HC). But it is the church’s fault somewhat because they have failed to pray. God told Diane Johnson, Bobby Connor and other prophets it was not His will for Obama to be President, but His people (the Church Christians) had deserted Him and had failed to pray against Obama.

Disagree. The FED no longer takes interest payment other than to pay their operating cost and 4 billion to the central banks for parking their billions at the FED. Most interest payments are return to the treasury at the end of the year. I hate the FED too.
http://mises.org/daily/6376/

This doesn’t make sense. They print money and charge us interest with nothing to back it up?