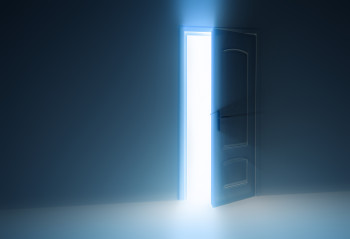 I dreamed I was in a cold dark prison. I remember being separated from my family. I remember being filled with despair and anger knowing I could do nothing to protect them. I had no idea when or if I would ever see them again. Suddenly, it was as if we were Israelites being thrown out of Egypt. The doors flung open and the guards let all of us leave.

I ran to the outside and franticly looked for my family. Then, I saw them and ran to them. As we stood outside of the prison, it was night and I could see the prison was in the middle of a suburb of the city. I saw the people who lived in the homes surrounding the prison started to pull down their shades and close their doors as if to say they wanted nothing to do with us.

I huddled my family close by me and we started to pull on doors to see if we could find some sort of protection and shelter. One door I pulled on opened and suddenly we were hit with this bright light as if it was daytime. The outside of the house was dingy, dark and damaged, but when you looked inside, the foyer and the stair case inside looked like a beautiful mansion with the most amazing rays of light shining in through the windows. We felt a welcoming feeling as we entered the house and went up the stairs. The stairs were in the shape of a V, meaning you walked up about 10 steps to a landing, turned to the right and (turning 180 degrees) then walked up another flight of 10 steps which would have put us above the entrance to the house. I knew the steps could not lead to anything as the steps pointed back to the front of the house, but at the same time, once we entered the house, it was as if we were in a completely different home and the home was in a different place.

As I mentioned, with the light streaming in, it was so bright and inviting. Out of the window, I could see palm trees swaying in the wind and the house was situated on a beautiful beach. Since we were just outside in the nighttime in a dark dank inner city neighborhood, I was completely confused as to what was going on.

As we walked up the steps, my family and I were suddenly filled with peace as if we knew it was all ok. At the top of the steps was a door. I opened the door and found a magnificent large waiting room. Again, the light was streaming in and we could see the beach and the trees as we overlooked the scenery. Then, one by one, my extended family members (Mom, Dad, sister and brother) started to come in through the same door we had just entered and we were all so overjoyed to see each other that we just stood and hugged without saying anything.

Our confusion as to what was happening turned to peace because we knew it was the rapture. We all looked at each other, then we all realized that our other brother did not make it. We all looked around and knew he wasn’t coming. All I can say is, we had a sadness that he was not there, but a peace knowing is was the right thing. It sounds strange, but it was as if we could understand that God has to make decisions as to who makes it and He will never force a person to be in Heaven if they don’t freely chose it.

Once we were all together, an angel came in to meet us and bring us through another door, which was the entrance to Paradise. He spoke to us briefly, saying, “Ok, it is time to go.”

Once we entered the door, we were hit with a blinding light as if you walked directly into the path of the sun’s rays. Once our eyes adjusted, we saw the most beautiful place, but it was different than the scene we could see out of the windows in the waiting room. I saw people everywhere. It was as if each immediate family got to gather together before entering Paradise to meet the rest of the extended families. With that, I woke up.

This dream had such strong emotions tied to it and it seemed so real. When I awoke, the imagery of Paradise stuck in my head and gave me such a warm feeling of peace.

© 2015 – 2016, Z3 News. The first 200 words of Z3 News articles may be shared online in exchange for a clickable link to our site. Please include the author name and do not make any changes to text or titles. No image files from our site may be shared because we don’t own them. For permission to use our content in other formats, please contact us.

Hello, I have recently started listening to Trunews and found this website during one of those programs. Back in 2005 I had a encounter with a messenger from God while going through cancer treatments. After my encounter I started to have dreams visions & experiences. I journaled them and kept most of them to myself. What I am learning is that most of my futuristic experiences are being confirmed by many others and what they too have received. What was I shown? I have seen spaceships, satellites, planes, astroids fall from the sky. I have seen burned out cities from nuclear warfare, tanks crossing our desert heading towards the east, huge tidal waves cresting over mountain ranges, Mt Fuji explode and take out Tokyo, glaciers traveling very slowly over America and experienced an earthquake so strong that I couldn’t stand while my teeth chattered. I have been told that aliens (not sure space or illegal) have poisoned our water supply and there is a “problem” with the North Pole. Why am I sharing? I am sharing because during the tidal wave and asteroid revelation, God had sent a space craft to take me and others out to safety. I haven’t heard anyone share about a saving experience until this journal. I felt I needed to share that hope with others. These things are coming but He will watch over those who belong to Him. God Bless.