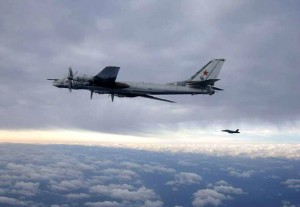 Two Russian nuclear-armed bombers circled the western Pacific island of Guam this week in the latest sign of Moscow’s growing strategic assertiveness toward the United States.

The Russian Tu-95 Bear-H strategic bombers were equipped with nuclear-tipped cruise missiles and were followed by U.S. jets as they circumnavigated Guam on Feb. 12 local time—hours before President Barack Obama’s state of the union address.

Air Force Capt. Kim Bender, a spokeswoman for the Pacific Air Force in Hawaii, confirmed the incident to the Washington Free Beacon and said Air Force F-15 jets based on Andersen Air Force Base, Guam, “scrambled and responded to the aircraft.”

“The Tu-95s were intercepted and left the area in a northbound direction. No further actions occurred,” she said. Bender said no other details would be released “for operational security reasons.”

The bomber incident was considered highly unusual. Russian strategic bombers are not known to have conducted such operations in the past into the south Pacific from bomber bases in the Russian Far East, which is thousands of miles away and over water.

“Every day brings new evidence that Obama’s ideological obsession with dismantling our nuclear deterrent is dangerous,” Bolton said. “Our national security is in danger of slipping off the national agenda even as the threats grow.”

Defense officials said the bombers tracked over Guam were likely equipped with six Kh-55 or Kh-55SM cruise missiles that can hit targets up to 1,800 miles away with either a high-explosive warhead or a 200-kiloton nuclear warhead.

The F-15s that intercepted the bombers were based at Kadena Air Base, Japan, and were deployed to Guam for the ongoing annual Exercise Guahan Shield 2013.

Two U.S. B-2 strategic bombers were deployed to Guam in late January and last fall advanced F-22 fighter bombers were temporarily stationed on the island. Three nuclear-powered attack submarines and the Global Hawk long-range drone also are based in Guam.

About 200 Marines currently are training on the island. Earlier news reports stated that Japanese and Australian military jets joined U.S. jets in the Guam exercises.

Guam is one of the key strategic U.S. military bases under the Obama administration’s new “pivot” to Asia policy. As a result, it is a target of China and North Korea. Both have missiles capable of hitting the island, located about 1,700 miles east of the Philippines in the Mariana island chain.

This week’s bomber flights are a sign the Russians are targeting the island as well, one defense official said.

Defense officials disclosed the incident to the Free Beacon and said the Russian bomber flights appeared to be a strategic message from Moscow timed to the president’s state of the union speech.