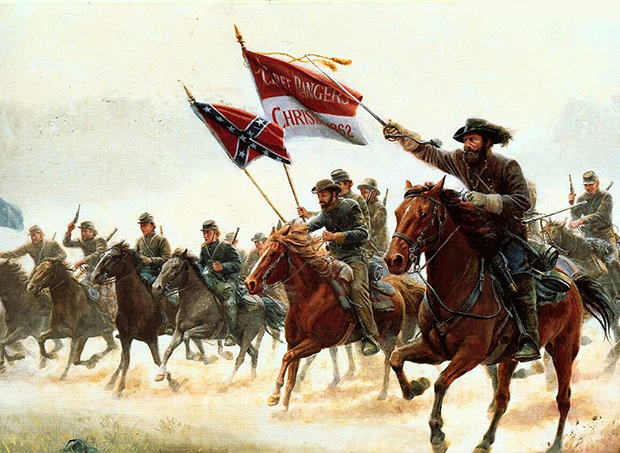 During the past few years, God has been giving His people prophetic warnings of a coming civil war in the United States. We’ve documented these warnings in 29 posts in our Civil War category. Now the battle lines are being drawn state by state in response to Jesuit schemes to force poisonous injections upon us all while at the same time pushing forward with plans to confiscate our weapons in direct violation of our Constitutional right to bear arms.

If you’re not seeing the Jesuit connection, please see my post: It’s Time to Get a Biblical Perspective of What’s Really Happening in the World.

Thank God there are still a few people who have not lost their mind and are willing to stand against these evil schemes. Florida is looking like a great place to live right now as Governor Ron DeSantis is taking steps to protect their citizens and businesses from the madness of vaccine passports which is now being developed by the Biden administration. This report was posted March 29, 2021.

“Gov. Ron DeSantis (R) of FL said on Monday that he is planning to enact an executive order preventing local governments and businesses from requiring any time of “vaccine passports”. DeSantis said, ‘We are not going to have you provide proof of this just to be able to live your life.'” These announcements come right behind his signing of a bill (Bill SB-72) designed to shield business owners from ever being liable for someone else getting infected with COVID in the state.” (See complete post)

Regarding our right to bear arms, more than a dozen states have already taken actions to stop the federal governments attacks as shown in this report posted today by Matt Agorist.

“Even before the two high profile mass shootings which took place in Georgia and Colorado this month, the Biden administration had a long list of efforts ready to roll out to infringe on your Second Amendment rights. However, these two tragedies provided an opening for the anti-gun crowd to exploit to begin ramming through even more tyrannical measures in warp speed…

Our founding fathers understood the importance of protecting this right as a means of preventing the rise of a tyrannical federal government, which is what we are now dealing with. And our federal government understands they must first disarm us before they can safely slaughter us.

In a dream several years ago, I saw a blond haired woman leading a national campaign to confiscate guns from the American people. I only saw her from the back as she was standing on top of a tall mountain viewing the land while her minions went forth to carry out her plans. Although her identity was not revealed, her blond hair shows it was not Kamala Harris. Her title was not revealed either but she had to be a high ranking leader in the federal government because it was a nationwide campaign and she had many people working under her. Although the fulfillment of what I saw has not started yet, our federal government is already pushing forward with this agenda.

Anyone seeking to stop gun ownership should consider the following quote from one of its’ greatest advocates:

“This year will go down in history. For the first time, a civilized nation has full gun registration. Our streets will be safer, our police more efficient, and the world will follow our lead into the future!”
– Adolph Hitler, 1935, regarding The Weapons Act of Nazi Germany

Those who think gun confiscation is a good idea don’t understand the evil plans of our Jesuit controlled government to mass murder the entire United States population as a means of exterminating all the Christians. The Jesuits have been cold blooded murderers from their beginning in 1540 so it would be foolish to think they wouldn’t do it again. God revealed their plan to me in a dream back in 2014 but it took me years to understand what I saw.

By all appearances our enemy has already gained the upper hand on many fronts in this war as they have already succeeded in dividing us against each other in our schools, our churches, our businesses and even our families. At times like this we should remember how our founding fathers stood in faith, with hardly any navy and a ragtag group of untrained soldiers, yet they prevailed against England, which had the world’s largest navy and greatest military. God specializes in the impossible because then everyone knows it had to be Him. There are many great stories of how He supernaturally gave them the victory. And if He did it for them, He can do it for us too.

There is a thread throughout history that attacks people everywhere and without any battle fields being drawn. In my life, I have seen that Jesus Christs advice and words are true. I was born without money, then my father made some and had his wage taken away by the government and we went back to poverty… They made false accusations, then my father paid a lawyer even though he was innocent and then when he won the case it wasn’t enough to cover the cost yet the lawyer (judicial system) got paid… in othewords, they got free money… It was better that I stayed in poverty to begin with. It’s pretty harsh but the rules and methods for one to obtain a world that god has given man has been clouded over with the notion that man has no place in this world. Pretty soon, poor men like me who refuse to bear the burden of being a papal slave will simply do nothing at all and not make good on their printed money scheme. Their lawyers just love creating false problems and accusations that they ay feed their fellow vultures. They will harden their hearts, become as furious as pharoah and seek to kill… all because those rich young rulers wouldn’t sell what they had and give to the poor as Jesus advised them to do.Nope, couldn’t handle that. But I endure pain everyday.I suffer. It sounds wrong, but we all know it to be true. People abuse the poor on a daily basis calling them lazy sinners and what not not percieving their bank accounts bear witness to their daily usury and milking the poor into submission. Stealing what people have and even what people don’t have-throwing them into negative positions and causing people to go mad and get raped in mental hospitals and jails. What makes things even worse is that My family was one that served the country in war all throughout it’s history. Civil war, World war 1 vietnam… but this generation will not do their will anymore! Nope.. I refuse to be their good servant. I refuse to make good on their money! Let them eat their own.

For a long time I thought she was the most likely person but since she’s getting older I’ve started considering other possibilities including Ivanka Trump.

That is so interesting about it possibly being Ivanka. When I read the article this morning I searched for a blond woman on Biden’s cabinet/advisors and came up empty. After reading your response to LoriQ I googled Ivanka and gun control. Surprise surprise, she supports stricter background checks and ‘red flag laws’. I:ll be carefully watching her.

I’ve had two dreams in which I saw a woman ruling in our nation but neither revealed her identity. Back in the 1930’s William Branham received seven visions for the U.S. and five have already been fulfilled. The next one is a beautiful but cruel woman ruling our nation. I can only speculate about Ivanka Trump, but came up with that because he saw beautiful and I saw blond, but it’s possible we could be referring to two different women. The woman I saw had shorter hair than Ivanka, just down to her shoulders, so it would get more interesting if Ivanka cuts her hair.

In addition, I began to think Jezebel incarnate?

Ivanka wore her hair like that a few years ago.