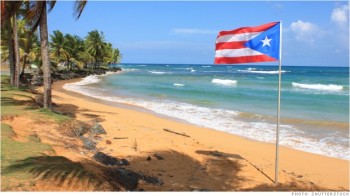 Terry Bennett saw instability ahead during August, calling it a cauldron in his June 17 interview with Rick Wiles on Trunews.com.

Puerto Rico might be one of the main sources for the instability as they have announced they will default on their next debt payment due August 1. The little island racked up a whopping $70 billion in debt by offering an overly generous welfare system, which allowed citizens to earn more money by not working than they could make working in minimum wage jobs. As a result, their labor force participation rate dropped below 40%.

As a U.S. territory, Puerto Rico is not allowed to file for bankruptcy protection. With most of their debt owed to U.S. banks, the impact of their default could be felt very soon. (Source: US News)

I believe Puerto Rico defaulted on a $422 million debt payment on May 2, and as it seems most of its debts are to US creditors, it seems like the US looking at more trouble on the horizon.

There also have been a series of unusual geophysical events taking place in the vicinity of the US West Coast. But none of those events seem to have affected mainland USA.

Perhaps we should take these as warnings that something terrible is around the corner?

PR missed their payment. IMF not supporting Greece bail-out. Market rolling over…… Josey, those islands will be history when the Tsunami hits (perhaps 8/9?). Then they will be a debt asset.

The Jones Act signed into illegal law by a dirtbag was one of the many coffin nails in Americas demise. Take PR, Haiti, DR, Jamaica, Cuba, and The Virgin Islands for The New Confederate States Of America. And I do mean “TAKE.” Give them all a choice : Go to The “United” States … or to South America. We need those islands for strategic defense.

Are you still on the buy side of USD/CHF? Are you waiting for it to reach .9800 as stated in a previous post by another person’s vision/dream &, or prophecy?

Thanks for your blog!

I am still in, hoping Rob heard right!

When it is time Nobama will “allow” such an occurrence to bring the economy to it’s knees (and to distract everyone). Given where we are in the timeline (worldwide market turmoil, earthquake/tsunami, Jade 21, ect)with everything coming to a head, PR could be the starting point…… Otherwise, they will extend and pretend the PR debt like all the rest……. In the past it has always been something “out of left field” that no one saw coming. That’s the way they like it so they can act blameless…..PR qualifies in that sense.

I’m sure somehow, someway, someone will come through and save PR. They can only play the game for so long though.

Here is the link:
https://www.youtube.com/watch?v=Y28-TetKToQ