You are here: Home » Babylon » 1st Beast is Obama » There appeared in his forehead between his eyes another eye, “a third eye.”
Share this post: 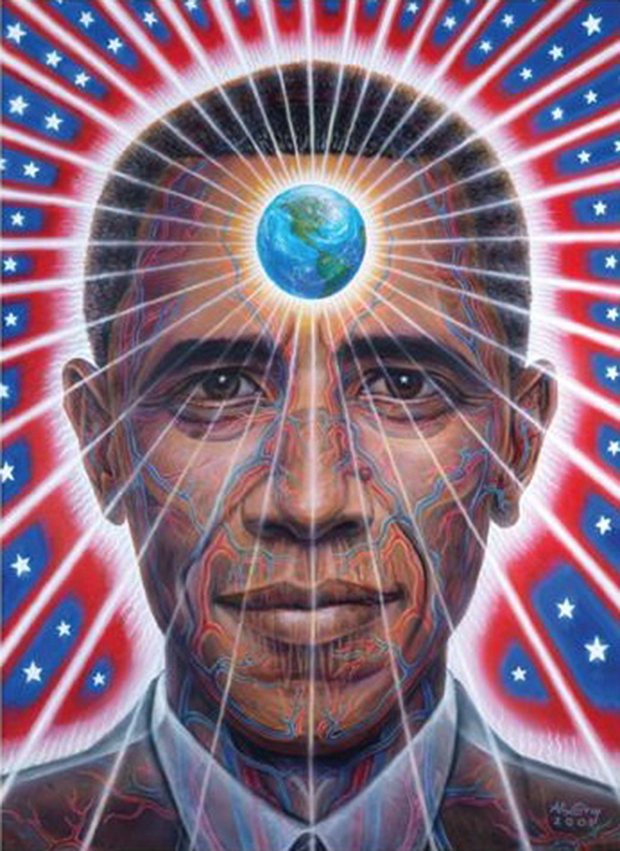 After Obama’s recent speech at the University of Illinois in which he sharply criticized President Trump, and stated that America should not “ wait for a savior,” and America does not “need a Messiah,” I felt compelled to share a recent dream. I pray you will take this to the Lord in prayer because I believe it is relevant to Obama’s endtime identity.

In the dream, I saw Obama and he appeared aged, almost ancient. As I looked at him and considered his appearance, there appeared in his forehead between his eyes another eye, “a third eye.” 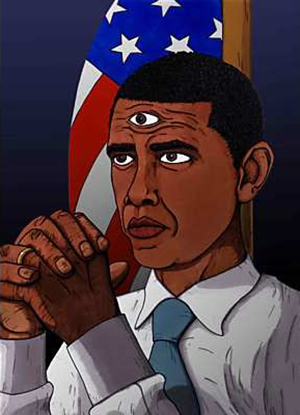 He seemed angry and irritated with me that I was able to see his third eye because he had thought it was hidden to other people. The vision quickly changed to another image of him and he had two snake-like creatures protruding out of his right eye. End of dream.

I do not recall ever hearing the term, “Third Eye.” God will sometimes give me a word or image I am not familiar with to let me know it is Him speaking and not just the imaginations of my own heart. I began to research the meaning of the third eye and what I discovered was fascinating as it relates to Bible prophecy and the man of sin.

The concept of a third eye dates back thousands of years. It is occult in nature and refers to enlightenment and awakening the Godlike power within. The spiritual act of “Awakening The Third Eye” is still taught in eastern traditions like Hinduism.  Almost all ancient world religions utilized the third eye. I have included a short video below explaining the history of the third eye in ancient Egypt where it was a central doctrine of their religion. (Source: RichardCassaro.com)

I believe Obama appeared aged in my dream because it was symbolically conveying the ancient roots of the third eye. Also, the two snake-like creatures protruding from his right eye signifies demonic infestation and total spiriritual darkness. According to Richard Cassaro, with the rise of monotheism the third eye was outlawed and during this time the Aten (which stands for the awakened third eye), became known as the caduceus. It symbolically showed the awakening of the third eye as finding a balance between twin serpents. Perhaps the two snake-like creatures I saw protruding out of Obama’s right eye revealed not only his demonic infestation, but also showed the process of trying to awaken his third eye to obtain godlike status.

The eye in scripture signifies spiritual understanding. Most bible scholars believe that Zechariah 11:17 (and his right eye shall be utterly darkened) is a reference to the antichrist.

In a recent post by Mena Lee Grebin, she shared a dream in which she and a coworker were trying to decode a message written in ancient symbols and languages. There were three languages: Arabic, Hebrew and Egyptian hieroglyphics. They were unsuccessful at decoding the message, but Obama told them exactly what it said, “It says, ‘The only God, is the God within.’ The chart is about me.” (See complete post)

I believe my dream reveals that Obama will take the path of ancient occult religions to exalt and magnify himself as God.

For God doth know that in the day ye eat thereof, then your eyes shall be opened, and ye shall be as gods, knowing good and evil. {Genesis 3:5}

And he shall magnify himself in his heart. {Daniel 8:25}

And in the latter time of their kingdom, a king of fierce countenance and understanding dark sentences shall stand up. {Daniel 8:23}

He shall exalt himself, and magnify himself above every god. {Daniel 11:36}

Neither shall he regard the God of his fathers, nor the desire of women, nor regard any god: for he shall magnify himself above all. {Daniel 11:37}

Who opposeth and exalteth himself above all that is called God, or that is worshipped; so that he as God sitteth in the temple of God, showing himself that he is God. {11 Thessalonians 2:4}

This reminds me of the ancient Isis and Osiris religions and the Eye of Horus. Also, Nimrod, who was a human decendant of Noah became a Nephilim or Rephium by using ancient technology or means that he found in pre-flood tablets from the time of the first incursion by the fallen angels. That same technology is accessible in the now modern time with DNA manipulation techniques that have the ability to permanently alter one’s entire DNA and pass that on to future generations, giving new meaning to Jesus words about whether any flesh (human) would remain if he had not cut the end times short. Tom Horn of Skywatch TV and Steve Quayle of Genesis6giants.com go into this in various videos and books, as well as several others like Rob Skiba on his youtbube videos on Nimrod. Mike Adams at NaturalNews.com also puts out all kinds of articles on vaccinations and the new Universal flu and other vaccines that have the ability to permanently alter one’s DNA, while not the “mark of the beast” they are the precursers setting the stage for the biochip tech that exists now and will be required along with worship of the beast. It could be that you are seeing Obama being transformed by the tech to become a suitable vessel for the former demon spirit of Nimrod or some other Nephlim spirit.

I would imagine when many people read this that they are thinking they can help him out with that third eye…if you know what I mean Vern.

Hello Lydia, it is interesting that it was his right eye, this scripture came to mind when reading your post; Zachariah 11:17-Woe to the idol shepherd that leaveth the flock! the sword shall be upon his arm, and upon his right eye: his arm shall be clean dried up, and his right eye shall be utterly darkened.

Yes Ken I did reference that scripture in the post. I believe the dream revealed Obama is the one who exactly fulfills that scripture. I know some people are expecting the antichrist to be blind in the right eye and to have a literal withered arm, and while I think that is certainly possible I think this scripture is probably more symbolic. The arm in scripture seems to always refer to power and strength and the eye to spiritual understanding. With his right eye utterly darkened, I believe that means he will be completely controlled by the powers of darkness. And his arm being clean dried up I believe refers to Jesus totally crushing his power when he returns. And then shall that Wicked be revealed, whom the Lord shall consume with the spirit of his mouth, and shall destroy with the brightness of his coming. {2 Thessalonians 2:8}

zechariah11:17 i believe is talking about having a stroke (head wound and healed) cuz your arm goes gets numb n dried up when oyu have a stroke and the eye darkens they say i heard pastor david lankford mention it a few weeks ago had to comment when i heard you bring up this scripture to her..

Hello Lydia, it is interesting that it was his right eye, this scripture came to mind when reading your post; Zachariah 11:17-Woe to the idol shepherd that leaveth the flock! the sword shall be upon his arm, and upon his right eye: his arm shall be clean dried up, and his right eye shall be utterly darkened.

Yeah it totally caught me off guard.

I’ve only had one dream about Obama – a few months ago. He was in my bedroom, sitting on my bed wanting to have girl chat. He was acting effeminate and I didn’t want him there. Suddenly, I realized that he was very evil under this happy-go-lucky facade. I took his hand and looked him in the eye and said “the Lord Jesus be with you.” When I said that, and somehow by my laying of hands, he started to burn from the inside out and his flesh started melting off his body. I could tell he wanted to get away and yet he was completely bound to my words! Also, a coworker of mine (she has some strange religious beliefs that are a mesh of Christian and mystical) dreamed that she was at a Chicago Cubs home game when Barack and Michelle touched down on the field, in a helicopter, mid-game and everyone forgot the game and started celebrating “Obama’s back!”

Thanks for sharing this Heather.. the Lord is more powerful!!

Thanks for sharing these dreams Heather. I’ve added them to my collection.

Thanks so much for sharing. His return seems to be a common theme in dreams. So common it certainly makes me take notice.

Lydia… I am not sure if you are aware of how true your words are… Obama looks exactly like Pharaoh Akhenaten and his wife Michelle looks like Queen Nefertiti! I also posted an article that shows the pictures of the Obamas and the queen and pharaohs… That a look! Thank you for your words tonight! Many blessings shalom

Thanks for sharing. I do see the resemblance.. Spooky!

There is an article from 2008 on the internet titled”Lead singer of Third Eye Blind to speak for Obama”. Stephen Jenkins lead singer of the aforementioned group is a “surrogate” of Obama’s that traveled the college circuit speaking. Must have been just prior to the election? Anyway, I thought the name of the band was very interesting with it’s connection to Obama and the subject of this article.

Wow thanks for sharing that. I had no idea.

Lydia,
Last fall, I dreamed that Obama was furiously looking for answers in an ancient book. I couldn’t read the letters in the book and knew it was important to him. It was a large, old, and very thick book. Recently, I dreamed he approached me and tried to engage me in a conversation, I walked away from him. I never spoke one word to him and was relieved that I had not.

Ivette,
It seems like I remember you posting something about that book before. It would be fascinating to know what language was in it.

Yes, I mentioned it and I shared a few other dreams that all came last fall, they were unnerving dreams for sure. Often, the dreams I receive are about the body of Christ, worship, or about specific states. I watched a snippett of his speech in Illinois, shocking statements were made. We continually pray that God would wake up His people, or they risk being deceived.

hi, when you say right eye, do you mean when facing him the snakes appeared from his eye on your right (which would be his left eye), or his right eye as if you were standing in his place?

Aaron, when I said his right eye, I meant exactly what I said. I was facing him and the snakelike creatures were protruding from his right eye. I’m curious why you ask because I thought it had been made clear.