You are here: Home » Prophecies » America’s Future Revealed in Two Visions of the Eagle 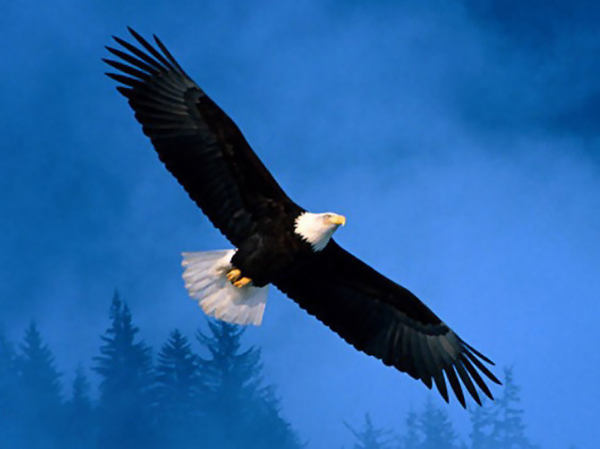 In 2015, I received two visions of the American eagle, which I believe showed the future of the United States of America.

First Vision: I received the first vision on Passover 2015, which was also the day of one of the tetrad blood moons. I was in prayer when I saw a sick eagle with a hung head, like it was very tired and sick, to the point that it seemed ready to die.  The scene changed and the eagle was flying.  It appeared as if it had somewhat recovered, but was not flying like a normal majestic eagle.  In the final scene, it had died.

Interpretation: I believe the eagle represents the United States after some future events bring our nation down to the point of being tired and on our last leg. Just as it seemed as if the eagle would just lay down and die, it did not.  It began to fly again, but it was not strong like it once was. I believe this flight represented a revival in the land, but only for salvation purposes and not a restoration to a place of physical dominance, strength or pride.  Concerning the death of the eagle, I believe the Lord impressed upon me that the reason why the eagle died was because it was the end of this age, the time when He would come back to rule and reign for a thousand years in the millennium.

Second Vision: The second vision took place only a few days later. Once again, I was praying, but this time I saw a white porcelain eagle.  As I beheld it, its’ right wing broke off and fell to the ground.  Immediately after that, its’ left wing fell and that was the end of the vision.

Interpretation:  I believe the white color represented a loss of pigment; rendering it anemic and therefore weakened.  Additionally, porcelain is very fragile, which represents where we are today as a nation. This nation has been brought to a tipping point in which a fall would shatter everything God has blessed us with.  What also came to mind was that the right wing represented the right wing conservative party, so its’ fall represented the conservative party taken down. Then the left wing liberal party fell quickly afterwards.

Conclusion: The Christian conservative movement represents the foundation of our nation. Many on the left care nothing about the conservative foundation that was initially put in place to help guard us from self-destruction.  The Word of God warns us in Proverbs 23:10 not to destroy the old landmarks.  Also, Palms 11:3 says that if the foundations be destroyed what can the righteous do?  Our Godly foundations were set up to acknowledge that the God of Abraham, Isaac and Jacob had become the God of America as well.  The elite’s goal for a socialistic government is necessary in their eyes, but it is rooted in a hatred for Godly order, which in retrospect exposes their hatred for God Himself.

Are we on the verge of witnessing some type of foreign attack or even a planned false flag event designed to take down the conservative movement led by President Elect Trump?  If this happens, it could be the very thing to bring down the left wing immediately afterwards.  Let’s pray not, but in the meantime, we need to remain on the wall.

Thanks, Peggy. This is an extremely dangerous period we are in.

The holiday has overshadowed the holiness. Blindness covers the eyes. Millions reject the Saviour and embrace Santa. This should trouble all who call Me LORD, but it doesn’t. 2016 will not end in peace for many. 2017 will see chaos and violence continue.

STOP!! Look around. See the hurt the pain in the eyes of so many.

How many do you encounter daily who are traveling the broad road? How many stand at the wide gate? How many?? Give a smile, a kind word to encourage and uplift for this is the true meaning of Christmas…

‘For God so loved the world that He gave His One and only Son, that whoever believes in Him shall not perish but have eternal life. For God did not send His Son into the world to condemn the world, but that the world through Him might be saved.’ John 3:16-17”

Paul Martin said on a very recent “Common Sense Show” interview that it is the most dangerous time in WORLD HISTORY, and Dave Hodges agreed with him.

Thanks for sharing Peggy!

Freeman,
Thanks for sharing your visions!
I like your name “Free Man”— Free man in Jesus Christ, like all of us!

Here’s a poem worth thinking about.
It was written by my husband when he was about 18 years old:

If you should die this very night
And come before the Lord
To read the book of life you wrote
And claim your just reward,

Would you be afraid, my friend,
To hear that judgement read,
And know for all eternity
Your soul would then be wed?

He’d ask about the little things
You thought nobody knew.
What would you answer Him, my friend,
Now tell me what you’d do.

He would not ask about your car
Or the candidates you favor,
For these things won’t mean very much;
But did you love your neighbor?

The time you helped that blind man
To cross that busy street
Will ring high on the scales of life
When your God you come to meet.

And though we’re just pretending
This day is the last on earth you trod,
It very well could be tonight
That you’ll keep your date with God.

Referring to my husband’s 4th stanza in his poem, obviously, we need to vote for candidates that represent Biblical values; overall, it’s a great poem written many years ago and at a young age.

What a graphic assessment of where we are as a nation symbolized by the eagle. The part in the first vision where the eagle is partially restored for a short season reminded me of some person’s prophecy of a big revival after judgements fall that lasts 3- 5 months. Interesting that our national symbol can be used in this way to show the state of the nation. By the way, that is such a beautiful picture of the eagle, it’s wings spread so wide, just soaring. That’s how we used to be. Thank you, Brother Freeman.

Thank you for your input Brother Jesse. Blessings!!!

This article reminded me of a dream that I dreamed a few nights ago, I watched an 18-wheeler come into town. A picture of Heidi Baker was on the 18-wheeler, along with some other men I knew were Mighty Men of God. Fonzie (from Happy Days) was also pictured.
Then a stampede of people followed, many jumped into a large swimming pool. The last thing I remember was seeing Heidi bite off the head of an Eagle.

I feel like the 18-wheeler represents a large shipment from God coming to America leading into revival led by God’s chosen vessels. I think these will be happy days (Fonzie) where many will jump into the Holy Spirit (swimming pool). But I am not sure why Heidi was biting off the head of any Eagle, any ideas?

May be this is why.
https://z3news.com/w/heidi-baker-americans-suddenly-bread-lines-soup-kitchens/

Wow! Thanks for sharing Brother Joe.

Interesting dreams, Freeman. Patricia Green prophesied that the judgement of the U.S. comes during Obama’s term.

Yes Bro James, I believe that I’ve seen her video on this before. Thanks for your post!

A 2nd possibility is being floated by Brandon Smith, who correctly called Brexit and the Trump win and is now stating: “I have heard arguments from some that this tactic would simply not work. That people would “never buy” a narrative in which Trump and conservatives are blamed for a market collapse that was at least eight years in the making. I have to say, this view is incredibly naive.”

And Gregory Mannarino is reporting today that the main stream is being “allowed” to admit that the Fed has rigged the markets. Why admit it?

Sephora, God is putting all the cards face-up on the table so that even Joe 6-pack can see that the world is corrupt and it’s time to sell out to Jesus.

Since God’s way is always purposeful, I thought I would let you know that by no coincidence…at the same time you were receiving your first vision on Passover 2015…Dr. Patricia Green also received a vision on Passover 2015…she was told “Five more Passovers”. No other explanations…she feels something significant will have occurred by the fifth passover (2020)…God Bless!

Washington Post reports that Putin’s actions against Hillary were in retaliation of her interference against him during his re-election campaign. If so then Putin’s actions have nothing to do with Russian support of Trump. Paul Craig Roberts reports:http://www.paulcraigroberts.org/2016/12/17/only-a-counter-coup-can-save-american-democracy-paul-craig-roberts/

Trumps willingness to take on the deep state puts him in mortal danger. Listen to Paul Craig Roberts, Asst. Sec. of Treasury for Reagan.http://www.paulcraigroberts.org/2016/12/20/as-the-coup-against-trump-fails-the-threat-against-his-life-rises-paul-craig-roberts/

A word through GLYNDA LOMAX (wingsofprophecy)

The enemy has attacked and brought destruction, but this is not the end, for I am the God of Restoration.
I am the God who restores to greater than before for those who worship Me and walk in My ways.
All is not lost.
Find your peace, and your provision, in Me alone.

Joel 2:25
25 And I will restore to you the years that the locust hath eaten, the cankerworm, and the caterpiller, and the palmerworm, my great army which I sent among you.

Proverbs 3:5-7
5 Trust in the Lord with all thine heart; and lean not unto thine own understanding.
6 In all thy ways acknowledge him, and he shall direct thy paths.
7 Be not wise in thine own eyes: fear the Lord, and depart from evil.

The song title is “IN CHRIST ALONE”— don’t miss this!
https://youtu.be/0dKzs68T4sY

Last Friday Obama told Russia there would be consequences, a reprisal, to Russia’s (so called) interference in American politics. On Monday two important Russian diplomats were assassinated, one in Turkey and one in Moscow. The same scenario played out this past summer when Putin’s favorite chauffeur was killed in a head-on car “accident”. Almost no one knows how close to WW III we are. WW I started with the assassination of Arch Duke Ferdinand of Austria. This talk of God’s reprieve is nonsense. When they say peace and safety…

Amen, Bob Adolph…reprieve without repentance? How so? (smile)

Does this vision have any alignment with Ezekiel 17? I was reading through that this morning and it reminded me of this… thanks.