You are here: Home » Church » Persecution » American pastor locked up in Turkish jail for more than 500 days. 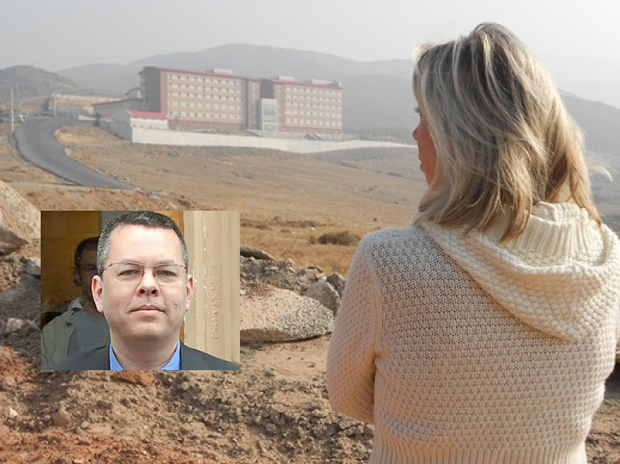 Sharlene’s vision #47 regarding Pastor Andrew Brunson occurred in the late evening of March 23 this year.

It started with me on a mountain top that I often go to when I proclaim Psalm 91 over the world. Just before I was about to fly on my own and pray, the eagle that I have flown on the back of in a past vision appeared to my right and beside me. I asked if He wanted to accompany me with my prayer. I got on His back and we flew, with me proclaiming Psalm 91 as we went. We came to a cell in a prison.

I immediately saw a man sitting on the edge of something- maybe a bed or chair. He had his head in his hands and he looked so discouraged. I think he was crying and praying. My view changed here as I saw myself praying over him and I spoke in his right ear- continuing to pray the entire Psalm 91 to him.

From there I flew back to the Throne Room and I prayed for this man. I then understood he is the pastor that has been in jail in a Turkish prison for some time.

From there, I went to join my friend in the vision area and we turned to view the vision. The screen opened up to the face of President Erdogan filling it. Then it changed to a courtroom and I saw the man from the jail cell sitting to the side in the area of the accused. He was in handcuffs. I heard the word “guilty” and he was led away.

In the next scene, he was being blindfolded. I wasn’t sure what that was about so I asked Jesus if he is sentenced to death. He replied, “We need to pray for him for his life is in danger.”

Andrew Brunson, an American pastor who’s been locked up in a Turkish jail for more than 500 days, could spend the rest of his life in prison.

Until now, he’s been held without charges, but last week, a Turkish court approved a 62-page indictment against him. The charges include membership in an armed terrorist organization and military espionage.

Brunson was one of many other Christians who was arrested or deported from the country following the 2016 failed coup that left at least 161 people dead.

Hi Hope, After I read your post, I thought about how an angel came to the the Apostle Peter’s cell and how he was miraculously released. I have to confess that when that thought came, I did not immediately have the faith for this to take place for pastor Andrew Brunson. However, faith was stirred in me when I began to pray in tongues and heard the words “Ishi-doors”. For there to be understanding of what is meant by this, I need to share the following: A woman I knew desired to speak in tongues and when many people and different ministries prayed for her and laid hands on her, nothing happened. Finally, one day when just a couple of us got together and pressed through for her, she received one word and that word was “Ishi.” She had faith that it was God-given and went around saying “Ishi, Ishi, Ishi” for days. A week later, I opened the scripture to Hosea 2: 16: “… you shall call me Ishi; and shall no longer call me Bali”, and the Holy Spirit showed me something that I have never forgotten: Ishi means “husband” and when we pray in the Spirit, we are praying in the intimate language of love- We are approaching God no longer as a servant does with his master, but as a wife whose requests will be heard and not be denied because speaking in tongues is the praying of HIS will, not our own. The book of Acts shows that Peter was released WHILE they were praying. Oh brethren, let us pray for pastor Andrew Brunson and believe for a miracle for him. Because I received the word “Ishi-doors”, it may indicate that more than one door will be needed for him or it may be that… Read more »

Amen Michelle, I will pray for you tonight. And if Jesus told us to pray in this vision….we better do it!

Thank you so much Hope. 😘The minus sign on this comment came when I hit it instead of “reply”.

Thank you so much Hope. I had an extra surge of strength in my body yesterday and much joy. I am praising God for it and for the love and prayers of His people. God bless and answer your prayers. I pictured a diamond engagement ring right now which may represent the assurance that our Lord is commited and engaged in answering those prayers. It may symbolize something different, but it’s wonderful whatever it means, eh? ❤️

My 87 year old grandmother called me a few weeks ago, to tell me that the Lord gave her a Scripture for me…Hosea 2:19. Wow. I’m floored! Not that I should be the least bit surprised by my Lord anymore. He never ceases to amaze me! Praise God! Friends, please go to Jay Sekulow’s website, ACLJ and sign the petition for this Pastor, and first and foremost, sign the petitions to END ABORTION! I watched a prophesy from Lois Vogel-Sharp and heeded her warning from the Lord. I ask you to unite with us and do the same, in the name of Jesus! God Bless you all. Nickie 🦋

Hi Nickie, How blessed you are to have a praying grandmother who hears from the Lord. I am from a small family of unbelievers and have never had any family members pray for me except for my precious children. I take that back: My mother in her time of dying from Lou Gherig’s disease came to know the Lord may have, but she was unable to talk then. She wrote on the blackboard:” I don’t know Jesus, but I want to”, so yes, I do believe she prayed for me. P.T.L.!!…..This morning during my time of praying in tongues, I heard the word: “Ishi-Bride” over and over again. And then I heard the word “Ishi-Bride destiny.” After that the Lord said that He was like an embassy filled with people doing governmental business (not the exact words, but close… I think He said another word instead of “people” but I didn’t retain it). I thought about us being His house and yes, we in our representing Him are like an embassy. I got excited in thinking that our embassy is beginning to be built in Jerusalem right now which is a sign to us that the TRUE governing ones in the body of Christ who are His ambassadors are soon to be established in the New Jerusalem which the Book of Revelations states is the Bride. Yes, Vashti’s reign is about to be replaced by “Ishi-bride’s destiny” coming forth. Hallelujah! Thank you Nickie for pointing us to a practical way in which we can assist in the release of Pastor Andrew. I signed the petitions for him and for abortion as well and will be forwarding this post to people on my E-mail contact list requesting that they do the same. Bless you for your faithfulness in giving us this… Read more »

Michele Renee, thank you for our response to me! I love your word on “Ishi-Bride”! Thank you for taking the time to tell me about it. My grandmother’s 87th birthday is today! She says to tell you thank you as well. You have just added one more person to your life who will keep you in prayer. Love you in Christ! Nickie 🦋

What a lovely and loving response Nickie. Thank you so much for it and for your prayers and please thank your grandmother for me. I have felt them and was much stronger in my body yesterday able to do almost all the exercises in my aerobic class in the pool. Yay and P.T.L.‼️When I prayed for your grandmother, a picture of a seal flapping its little flippers came to my mind and I remembered a greeting card with a beautiful seal on it that I sent out to loved ones. In it I wrote that the seal on my card was a symbolic sign that pointed to the fact that the Holy Spirit has placed a seal in us of our promised inheritance …. that it is this divine mark that enables us to make melody in our heart’s harps and be like harp seals flapping their flippers (our wings). May all those who celebrate your grandmother on this special day flap their wings too, causing a mighty wind of the Spirit to bring her much joy and manifested glory. Please wish her a happy 87th birthday for me and let her know my flippers are in motion too, sending breezes of blessings her way.🙏❤️

Have prayed that something miraculous like what happened to Paul and Silas. God’s angels to the rescue!

Praying for him and his family.

Thank You for sharing this so we may all pray for him.

Lord may your will be done as we pray for this man spreading the gospel. Walk with him in this time of persecution. Thank you in Jesus name Amen.

Praying for pastor Brunson and Michele

Praying for Pastor Brunson weekly now and praying that I pray daily for him.

The real people behind Muslim extremism. Straight from the Horse’s mouth.
https://www.rt.com/news/422563-saudi-wahhabism-western-countries/

Thanks for sharing this Steve. I doubt we would ever hear this reported by western news sources.

True James. Here are some photos depicting Afghan life, shot by an American professor on a teaching assignment before US brought in Mujahideen to fight Soviets.
http://www.dailymail.co.uk/travel/travel_news/article-3404803/Life-Taliban-Fascinating-photographs-idyllic-Afghanistan
And some from Iran before 1979.
https://onedio.co/content/23-pre-revolution-photos-that-show-iranian-womens-transformation-10304