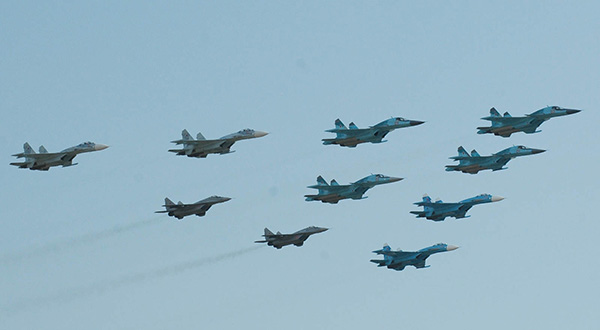 I had this dream a few weeks ago. I want to say I have not been too focused on the news or alternative shows like times past. I have been trying to stay focused on building up my spiritual strength in going after the Lord and keeping my focus primarily on Him. I say this because to me it brings even more credibility that these dreams are God inspired.

It was a bright sunny day. I was in a nice park, which was spread out in an open area surrounded by different shops and restaurants. There were a decent amount of people walking around and enjoying the day.

Then there was a sudden shift in the dream, one by one people began looking up in the sky and pointing. I looked up and saw what appeared to be hundreds, if not thousands, of small dots flying high in the air. It took only a moment for me to recognize that those small dots were in actuality, planes flying high in the air. Out of these planes came thousands of parachuting soldiers. It was like out of a scene from a movie. The entire sky was filled with them.

I also saw helicopters and fighter jets, but my focus was on the parachuting soldiers. It was eerily quiet as people continued to look with a sense of both awe and also unbelief.

Then there was another sudden shift in the dream. Out of nowhere came these drones that had guns on them. There were quite a few of them flying just above the tree line and they began shooting people. As people realized what was happening, complete panic ensued. People began running everywhere trying to find cover and escape.

I knew I had to find safety and began praying out loud as I ran for God to help me. I remember saying something like “help me Jesus” over and over as I ran. I saw a building behind me and I instinctively knew it was a church and that it was going to be the only safe place for me to go so I ran as fast I could towards it. As I ran I remember seeing a symbol on one of the helicopters that I recognized was Russian.

I wondered how could they have been able to mount such a massive attack without our defense systems intercepting. Instantly, I knew this invasion was allowed and coordinated within our government along with the other nations attacking. It was a complete inside job that had been allowed.

I know these types of dreams are being seen as almost “a dime a dozen” to people these days but I feel strongly that we must not get used to the warnings because God is not warning us just for the sake of warning us. He is looking for a response.

Casey Toda was radically saved by Jesus Christ over 10 years ago and his life has never been the same. His passions are to pursue the Heart of God in intimacy, worship and knowing Jesus as the Bridegroom during these end times.

No one else is to be blamed. People suffer for their own sins. There is no point in accusing the American government or Russia. American people are the only ones who will be responsible if such a fate comes to them. It is better to take responsibility, repent and ask for guidance. We don’t know who all will be tested and to what length.

Heidi, That is wild about Canada I had a dream a couple of weeks ago were I was flying over it and just kept shaking my head saying” Oh Canada” I was so sad for them, but I did not know what the dream was about.

Michelle:
A word was given to me by the Lord concerning Canada back in 2001. That word was posted on
z3news a while back. The word was also posted on believe acts2 i believe it was on January 16
of this year.

I am reminded of the vision the Lord gave me, posted here called “Putin, Obama and Xi Jinping Celebrate Explosion and Plume Cloud”. I believe the purpose behind the vision was to make aware and share that the things that will befall America are actually planned and arranged by the Obama government in co-ordination with Russia and China. Also in that vision I saw Canada joining the “fence” of the countries that are part of the higher-ups that are making the decisions of America’s downfall.

Heidi, in the April of 1996 vision given to Dumitru Duduman “the Russian and Chinese presidents made a contract to fight against America. A voice said to me, watch where the Russians penetrate America. I saw the words written: Alaska, Minnesota, Florida. Then the man spoke again, When America goes to war with China, the Russians will strike without warning. Everything I have shown you is how it will REALLY happen. Then when it comes to pass, the people will remember the words the Lord has spoken.”

Robert, thank you for that. I did not know that but it confirms what I saw. The sad thing is that Canada will be under judgement too as we joined the “fence” of countries that our previous prime minister was against, as he was a Christian man. Now we have a totally liberal (in every sense of the word!) government that has allowed the sins to come flooding in.

Yes a very evil BEAST Man hands the eagle (the U.S.A.) over to the Bear (Russia) I saw this too. In my dream the Bear plucked the feathers out of the eagle and then the bear sunk his teeth into the eagle and ripped the eagle apart. The eagle was totally destroyed in my dream. It was treason!

My son a few years ago, when he was 8 or 9, had a vision. We were driving through a café window to get ice cream, and my son became very quiet. He then said that there will be much loss of life in the DC area. I said, oh, it must be an atomic bomb, he replied, no; it will be fighter jets, I think they are Russian. Last week I had a dream that my family and I were driving in a large city. Suddenly, something shifted. We were driving on the opposite of the road, the same large buildings lined the street, but this time they all had a large red hammer and sickle. Next, my family and I were hidden in a large secluded room for protection. There is minister in VA who is now about 102 and she had an open vision in the 70’s or 80’s and she asleep at night and was awakened by helicopter’s flying overhead and the sound of bombs/gunfire and jets. She thought DC was being invaded. Then the Lord told her that no it was an open vision, but that she was to prepare herself and her congregation for that inevitability. That she would live to see this happen. Well, she is 102! Her name is Dr. Ellen Blackwell or The Way Assemblies of God Church. It is either in Fairfax on Arlington rd. or Arlington on Fairfax rd. At 96, when we say her, she would preach at the Way and then drive with her assistant to Charlestown WV where she had a retreat center and minister there. Once a month she would hold a day and night of prayer and fasting. She also has two centers on the sea of Galilee where she travels at least twice… Read more »

It was about mid Sept.2016 i was in my recliner. I suddenly went into a vision. I knew it was a vision bc i have dozed briefly many a time and never had dreams when waking from brief dozing. This is my first real vision I’ve ever had. I walked outside from some building and i recalled seeing few people out pointng up to the sky. I saw one person wearing a red jacket like. I looked up to the sky and saw hundreds of jets and they were all the same…I also saw the triangle looking ones. There were many soaring over and i went to duck and then suddenly it ended. I had a friend staying over and told my friend about it. I was trying to figure out what it meant. And “invasion” came to mind. I dont know what country.,but i saw myself ducking in the vision. I came to feel in my spirit afterwards that America is going to have an invasion coming. I keep us all in prayer for these times coming upon us. To stay strong in the Lord..Amen

Ken – I had never thought of the timing of the Mayflower Compact. That is interesting. Thanks for pointing that out.

You’re welcome Rachel. It’s all in the “2014-2021” dvd for purchase at http://www.prophecyclub.com Fascinating dvd with ton’s of information. 2020 will also be 40 years since Dumitru Duduman came to America from Romania to warn us of judgment on America.We all know numbers have meaning to God. Just something to be aware of when interpreting the season in which we live.

Ken Roberts, does Stan Johnson of the Prophesy Club see the A/C rising to power in Terry Bennett’s 2015-2021 period? That’s how I read it. In fact I have the article that Terry wrote for the Prophesy Club news letter on my wall.

No not the economist lol

I dreamt last night, out in the city & planes flying above us the people. They were firing on the people & I saw some get away. On radio I hear the news. The man is saying ” well we were able to dodge those bullets” then shortly after that there was a loud noise & people started to get a headache. Then I woke up. I felt the Lord was trying to tell me there are different tactics that may used. Not sure who the people shooting were but your dream Casey speaks volumes to me.