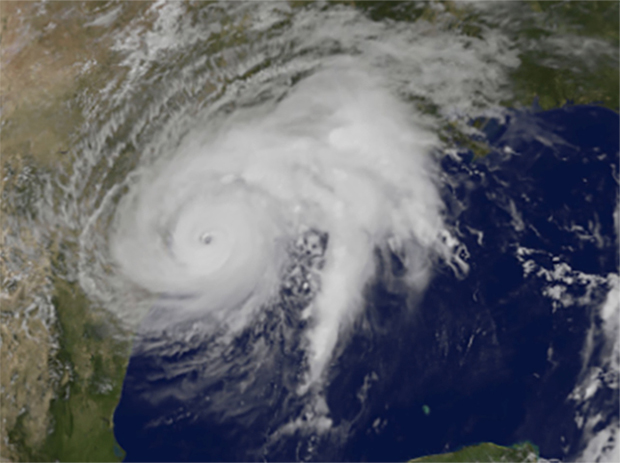 In the first vision, I found myself flying high above in the stratosphere. I was flying above a powerful hurricane (a category 3 or above). I observed as it grew in strength and the center of the eye became well defined. I watched as it headed for land. I was not able to see exactly where it made landfall, but I could hear in the wind, like I was listening to a news broadcast, about the destruction is caused on the coast it landed. I also knew it had landed in the United States.

In my second vision, I was walking along a gravel path. Jesus was walking beside me, on my right. As we continued to walk, the ground began to vibrate. I immediately knew that the vibrations were the result of a major earthquake that had taken place far away.

Jesus began to speak to me and said that the earthquake had taken place in the ocean, and that it was going to cause a tsunami. He then began to list three cities that would be impacted. For some reason, when he said the first two, it was muffled and I couldn’t hear the names. But then He said the third city, and it was Singapore.

I thought to myself, “Singapore? But that city is in a high place away from the oceans.”

The Lord knew my thoughts and immediately corrected me.

When I came out of the vision, I went to go look at a map to see exactly where Singapore is located. I found that it is a large city, literally on the edge of the island of Malaysia.

My heart sank when I realized that is was also near the same area where a devastating tsunami took place in December 2004, where over two-hundred thousand people lost their lives.

This vision took place about ten days after having the first two. I was watching televisions that were broadcasting in multiple places, but they were all addressing the same breaking news.

I saw the Washington Monument in D.C break in half, and then the top half came crashing down to the ground. The people on the news were talking about how sad it was to see such a thing. They were also talking about how the monument had just been fully repaired not too long ago after occurring damage from a small earthquake (this actually happened in August 2011).

Note: The Washington Monument was completed in 1884 in honor of the first president, George Washington. The monument is the shape of an Egyptian obelisk, which symbolizes timelessness, power and immorality.

The Lord spoke and said, “America, your land will not be healed!”

The Lord has numbered the days of your kingdom and brought it to an end; you have been weighed in the balances, and found wanting!

Saints, as you know, we have entered into a season of judgment. We must make sure that we are grounded in Christ; rooted in that which is unshakable.

Most likely the USA is Mystery, Babylon the Great as defined in Revelation 17, 18. If so, the USA will totally be destroyed. All people within her borders will either be removed or destroyed. I estimate this will occur before February 2027. It looks like the progression towards her destruction is on track as designed and implemented by the 10 kings.

I am from Singapore. I have been reading Z3 news for a couple of years. God moved me to start a small regular contribution to Z3 news just before James returned to post in Z3 news again after his hiatus from writing his book.

I am shocked to see Mena mention Singapore as it’s a small country and I suppose not many Americans know Singapore. I am even more shocked to see her mention tsunami because my 11 year old daughter saw a tsunami dream for Singapore a few years ago. It was so clear to her. She drew it out and shared with our family at that time.

James Bailey
Admin
Reply to  May

Thanks for sharing that confirmation May. And I pray for supernatural protection upon you and your family in Jesus name.

Jonathan Su
Reply to  May

I’m from Singapore as well. Already shared about it in a message.

Expat Gal
Reply to  May

Hi May – I just saw this warning dream from a Sister-in-Christ I follow about a mosquito plague & Dengue outbreak in Singapore coming – https://youtu.be/_TSDqJz86Ao so I wanted to share it with you as you live in Singapore.

I’m from Singapore too. There is already a dengue wave here right now.

Since the Washington monument is an ancient occult symbol erected by Masons; I pray this is a sign of Father destroying the principalities ruling over this nation and an end of the Masonic vision for America. I pray this will bring more and more people to repentance and obedience to Yahweh’s laws.

Granted the Washington monument is an ancient occult symbol erected by the Masons. And it could be that its damage could be a “a sign of the Father destroying the principalities ruling over this nation”. But it could also mean a sign of the end of the USA which is now deeply rooted in the occult. Her cup of iniquity is almost full. If the USA, is ancient Babylon, all within this nation will either be destroyed, move before she is destroyed, or will be taken captive. Few will be taken captive,

I’m from Singapore and I had no less than 3 dreams of a tsunami hitting my country. After extensive research, I’ve pinpointed the most likely cause to be an earthquake caused by the awakening of the Lake Toba supervolcano which has a magma capacity almost twice that of Yellowstone. This volcano is so large that the opening is thrice the size of the total land area of Singapore.

I happen to live in Singapore . It looks like this small island will not be spare during the tribulations as well.
could you give more insights when it is going to happen ? it probably will swept the whole island or half of it .

Isaiah 41:01 So do not fear, for I am with you; do not be dismayed, for I am your God. I will strengthen you and help you; I will uphold you with my righteous right hand.
https://youtu.be/XSuY47vPREs

Yes, and the original owner’s name was Francis Pope, the reverse of Pope Francis.

You”e not the only one,
I do listen to Stan at Prophecy Club because inside of his beliefs he does try to find the truths and he has interesting guests like this one.
Dana Coverstone and the next six months.
Its not good. I don’t want to be a nay sayer, doom sayer, but do have a foreboding,, haave no idea how we settle the divide, if Trump wins, I see everything the Communists have will be unleashed in fits of rage. If the election is stolen via mail in ballots, I see Patriots having enough and not letting this injustice stand.
So where does peace comes from, no where except us the True Believers will be upto us to love people that are hurting, we will have to be able to explain why this is happening, and most will not accept it. I don’t have good answers. I can’t help but remembr Dimitri Dudeman some of the people will start fighting wit hthe government,…

My son and I took a trip to DC last summer. The Washington Monument was still closed for restoration of the damage caused in 2011…even 8 years later. It looks like it finally reopened September of last year so the comment about just recently being repaired makes sense.

Pastor Vincent Xavier , said he was prying for our land, and the Lord told him STOP, he will not heal our land, that our Iniquity had reached the most high, instead pray for the people the time is short…

I was in Washington DC some time back and I had found that the three buildings to receive the most damage in the 2011 earthquake were the Washington monument, Smithsonian Institute and the National Cathedral. After visiting the National Cathedral, I knew this earthquake was a warning from God. The buildings represent governance (politics), science and religion. All three have been in a state of mortal decay. The material damage was representative of the rot happening to those institutions.

Example, The National Cathedral is more interested in gay pride than in the gospel of Jesus Christ.

But there has been no repentance. Round 2 must come.