You are here: Home » Babylon » Jesuits » America blindly trusting two Jesuits to lead our nation through the coronavirus pandemic.
Share this post: 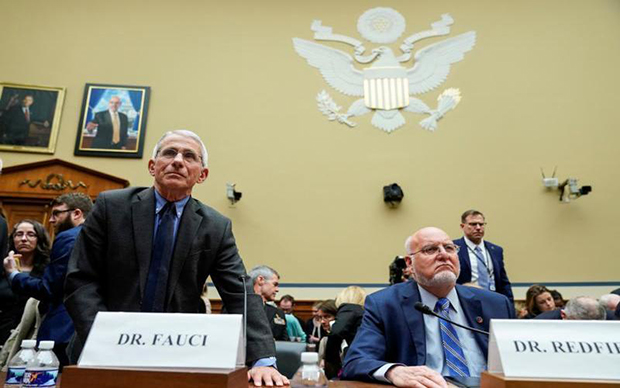 The sudden turn of events in our economy and the outbreak of the coronavirus pandemic should not surprise anyone because they are right in line with predictable patterns revealed by historical facts, but they have come as a big surprise to our nation due to living in a deep spiritual sleep caused by our rejection of a close personal relationship with God through Jesus Christ.

By rejecting the only light of the world, Jesus Christ, and replacing Him with a long list of lifeless counterfeits, including drugs, alcohol, sports, movies, sexual lusts, personal ambition, and on and on, we have fallen into deep darkness, so we have been blinded from seeing our adversary’s schemes unfolding right in front of us. The alarms should have been sounding from the pulpits of our churches, but have been silenced because our leaders have failed to do the things they claim to believe, bringing upon themselves the same spiritual darkness and blindness. The alarms should have been sounding in our schools, but they have also been silenced because we removed the Bible and prayer, making it illegal to teach the truth about God and history, so we have not heard about the dangers of an evil organization that has been expelled from over 83 nations over the past five centuries due to their unceasing treasonous, lying, murderous plots. We have not heard about how they have been responsible for the murders of hundreds of millions of people through wars, famines, diseases and murders. They are called the Society of Jesus, better known as the Jesuits, and they are now in charge of our federal government’s coronavirus campaign from their leadership positions within our leading health organizations.

Most Jesuits are not priests, just willing helpers, called coadjutors, who have been indoctrinated at Jesuit schools and universities where they are trained for their roles in advancing Jesuit schemes. The two primary agencies overseeing the coronavirus pandemic in the United States are both headed by Jesuit trained coadjutors, Dr. Anthony Fauci is director of the National Institute of Allergy and Infectious Diseases (NIAID) and Robert R. Redfield is the leader of the Center for Disease Control and Prevention (CDC), which is the leading national public health institute in the United States.

The following excerpt from a post on Catholiccourier.com provides some background details regarding Anthony Fauci.

Dr. Anthony Fauci, director of the National Institute of Allergy and Infectious Diseases (NIAID), has emerged for many as the voice of reason and integrity as the nation confronts the novel coronavirus pandemic.

Much of that he learned at Regis High School, a no-tuition, Jesuit-run boys college-prep school in New York City that is renowned as an academic haven. Fauci, a member of the class of 1958, told a group of alumni last May that attending the school “was the best educational period I could ever have imagined having.”

Fauci also is a graduate of College of the Holy Cross in Worcester, Massachusetts, another Jesuit institution.

“I take great comfort in knowing that when he speaks that he is speaking the truth and nothing but the truth,” Jesuit Father Daniel Lahart, Regis’ president, told National Catholic Reporter.

“I worry about a pandemic,” Fauci said last May. Now, less than a year later, his worries are a reality and he has emerged as the public face of the fight against coronavirus. (Source: catholiccourier.com)

The one-minute video clip below shows an excerpt from a speech he gave on January 10, 2017, just ten days prior to the inauguration of Donald Trump. The event was sponsored by the Center for Global Health Science and Security, which is part of one of America’s leading Jesuit universities, Georgetown University. In his speech, Anthony Fauci made the following disturbing comment:

“The issue of pandemic preparedness… if there’s one message I want to leave with you today based on my experience… is that there is no question that there will be a challenge in the coming administration in the arena of infectious diseases, both chronic diseases in the sense of already ongoing disease and we have certainly a large burden of that, but also there will be a SURPRISE OUTBREAK.”

The coronavirus pandemic did not start until three years later in January 2020, so how did Anthony Fauci know there would be a surprise outbreak during Donald Trump’s administration? Nothing to see here folks, just keep moving right along.

The same Jesuit Georgetown University that sponsored Anthony Fauci’s speaking event also trained Georgetown alumni, Robert R. Redfield. Despite having a long history of controversial public health actions, he was appointed to his position as director of the CDC in 2018 by another Jesuit trained government leader, President Donald Trump, alumni of Fordham University, the oldest Jesuit University in the northeastern United States.

Redfield’s controversial history includes the CDC’s initial response to the coronavirus in February 2020 when they sent contaminated test kits to state labs, leaving them unable to get conclusive results and thereby effectively delaying our response to the growing danger. In 1992, the Defense Department investigated Redfield after he was accused of lying about the effects of an experimental HIV vaccine which was developed under his oversight and ultimately failed to protect anyone from HIV. (Source: Vice.com)

These two men are just examples revealing who is truly running our nation. Sadly, it is not the American people. We have a lot of catching up to do, but the solution to our problems begins with sincere repentance before God, turning away from our sins to seek Him and walk in His ways. (2 Chronicles 7:14) Those who do will find help from the Holy Spirit as He guides us into all truth. (John 16:13)

If you find this story helpful and want to help expose the schemes against our land, please share it with your friends on social media, email links or whatever means available.

Thanks to Anne Chivers for finding and sharing the above video clip.