You are here: Home » Babylon » Antichrist » “We will be addressed by Barack Obama.” 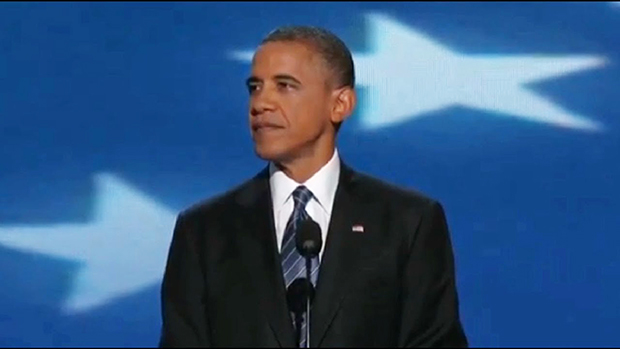 I want to share a disturbing dream that was given to me after asking a specific question in prayer about what’s to soon come.

The first scene was that I was running. I’m not sure who or what I was running from, but I ran straight into a dark room. As soon as I entered the room, I could feel that someone was there. I reached out my hand with my palm facing forward, and I yelled, “Who’s there?”

As soon as I said this, my palm rested up against someone’s chest.

A voice came from this person, and in a low tone he responded, “You already know who I am.”

At this point it was as though a dim light shone upon his face. There was no way of telling where this light came from, and it was so dim or limited that it only highlighted parts of his face.

He was taller than what he is in the natural. He stood at about seven feet or so. I noticed that on his shoulders rested a pair of hands, but they weren’t human hands. Although they had five fingers like a human, long black talons protruded out of the tips.

The next scene, I was in another room, seemingly next to the one I was just previously in. I saw two creatures standing next to each other in communication. The first one was very tall. He had skin like a human, however it was a reddish-brown color, almost that of dried blood. And there was a pattern on his skin that reflected that of a leopard.

The second creature was much shorter, but grotesque; jet black, slimy, and hunched over.

I knew that these were evil spirits.

I asked the spirits their identity. The tall one began spinning many names including the name Lucifer. But I responded with, “No, he’s in the other room.”

The short, black, slimy creature simply said, “I am filth and perversion.”

They both let me know that they had been assigned to Obama.

In the next scene, I was in the car with my husband. We were parked outside of a diner. The windows to this diner were huge, and you could see all the activity going on within. There were several large, flat-screen televisions mounted high on the walls.

Suddenly, a loud alarm rung from my cell phone. I picked it up and saw that it was an emergency alert broadcast. When I looked back at the diner, I could see that all the television screens had the same alert. Then the screens changed to the setting of a press conference in Washington, DC. Nancy Pelosi walked to a podium and began addressing the nation. She said that we were under a national emergency, however, she didn’t state from what. Next, she said that for the safety of the country, all the planes had been grounded, and all the borders had been closed.

No one was allowed to leave.

She then went on to say that there would be a formal national address at 3:00 pm eastern time.

As I was watching this from my phone, I was thinking, “Where’s Trump?”

Pelosi then says, “We will be addressed by Barack Obama.”

You could hear the shock and amazement coming from the tones of the press. Everyone was thinking the same thing…what happened to President Trump? Once again, I looked over at the crowded diner, and I saw that some people were in a panic, while others seemingly cracked a smile.

There is more I need to add to this, but I don’t want to make this post too long. Since being shown this, I recently (within the last couple of days) was given another dream revealing the details of certain types of Christians, and “right-winged” people who were being detained and sent to detention centers here in the US.

Before closing, I will reveal this;

A dear acquaintance of mine, who is also in the prophetic, contacted me shortly after Trump called a national emergency in order to obtain funds for the border wall. She said that she was not allowed to reveal this in public, but that the Lord spoke to her and said that the national emergency is in place, it will never be lifted, but rather it will eventually be turned into martial law.

When she said this, I was on the freeway, driving home. Cold chills ran down my spine, and for a split second, I actually felt fear.

About a month after she told me what was revealed to her, is when the Democrats voted to have the national emergency reversed. I was secretly hoping that it would be overturned because my friend’s words haunted me. So when Trump vetoed the bill, and the declaration stood in place, all I could do was pray.

It was shortly after this, while in prayer, that the Lord said He was going to give me the answer about what’s to come.

As with all things, take this to prayer.

I had a dream that Obama was wearing fatigues with short sleeves like Castro wore in a hot climate, it seemed like Cuba. He was sitting in one of those wicker Bohemian throne-shaped chairs. He was rolling up a cigar, and licked it slowly, looking slightly bored, while being a spectator to Jihadists who were using razor-sharp javelins pulling the pointed tips down Christians left sides , tearing them from their shoulders through their hearts, and down to their hips. Uncannily, In real life, my daughter had a baby shower that her dad’s wife put on for her. This woman and her friends lean very left winged They made my daughter sit in one of those throne chairs. I cringed. They had a photo above the chair on the wall of a young Michelle Obama sitting in the exact same chair. They were in love with her, and excited about it. My daughter was uncomfortable about this. It makes me wonder if Michelle will play a key role in being queen while he orchestrates from behind the scenes. She has had a lot of facial work done lately, and looks much more feminine. I also noticed Fox News often shows Biden with Obama. Either one could be lined up to be his puppet and mouthpiece, as well as Alexandra Ortazio-Cortez in 2024. Nancy P is third in line for president should something happen to both Trump and Pence. I felt like the cigar means he’s rolling up and on a pseudo throne, and not lit yet. Jihadist mayhem will be certain. That’s the first thing Trump was clearly trying to prevent when he came in office-Muslim immigration, and was shot down by Federal judges, a law that Obama concocted to keep his agenda floating. Trump isn’t always a straight shooter,… Read more »

Hi, Kathleen. Thank you for sharing that. When a believer receives a dream like that, and has no preconceived opinions or beliefs on a matter, it is most definitely a warning or revelation from the LORD. I will most certainly take your dream into consideration as I seek the LORD to tear down any preconcieved notions I may have about Donald Trump that are fleshly or based on influence from others’ opinions. I have been known to be stubborn or five steps behind on being convinced on matters, and if that is the case, I will humbly change my stance. Right now I’m keeping an open heart and open mind, seeking the LORD for answers. Concerning the map and Michele Obama, I am for some reason recalling the aqua Tiffany’s wrapped gift box Melania handed Michelle on Inauguration Day when they visited the White House for the first time. Michelle arrogantly sneered and asked Secret Service to take it away quickly, Melania was taken aback by her horrible ungracious manners. I don’t know if it has any relevance. Also, Mena Lee Grebin had a dream about an Atlas with which she tried to help Donald Trump find his way when he was driving and he refused her help. It may also be relevant. I’m thinking it could be a piece that relates to your dream. I think it was posted here on z3 in summer of 2017. God bless.

Carolane,
I keep asking The Lord about him
I have to know exactly how and what to think about him.
I started praying for him in the church prayer time
And seen him in front of Heaven. Faced away from
Heaven with wind blowing towards Heaven I seen by his chest rib area on both sides dark blotches,one a little higher then the other.
I’m asking the Lord what does this mean?
Not a good feeling
I’m a person that would go either way the Lord tells me to see him as
And I do remember what Mena had said also
I pray we see with Spiritual eyes to see what Jesus wants us to see …and only what he wants us to see.
Only with his heart not ours.
I love you sweetie

Shalom dear sister Mena,
Below is a link regarding the next test of the EBS. I am sensing that we are very very close to major upheaval. Jesus is right at the door. Millions have no idea what is about to unfold. God bless you dear sister.
God bless all on z3.
https://www.fema.gov/news-release/2019/07/24/fema-and-fcc-conduct-nationwide-emergency-alert-system-test

It seems like we already have been….watching the TV today I see his face featured prominently as his words, strongly hinting of Trump’s remarks concerning the recent shootings, are etched across the screen …as if his words came from the very mouth of God….remember the story in the bible where the people I believe stated of Herod..”this the voice of God and not a man”? that is how Obama’s disciples cling to his very words. Obama is the Left’s and the Democrats “Pseudo Kinsmen Redeemer” it appears.

Dear James, just a question. I noticed there’s a share button on comments but not the main post. Is that by design?. Blessings.

The software running the site is free and comes as is. It is not my design.

You should be able to share using the icons, etc just below the title and above the main photo.

I cannot seem to find those icons you mentioned. Maybe its my browser. Thanks though.

After clicking to open any post, the icons should show up right below the title.

Finally found them. Thanks. I use brave browser and it’s in-built ad/tracker blocker removed those icons.