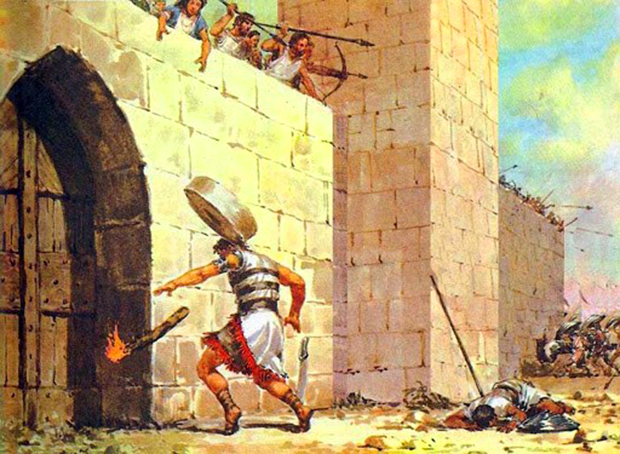 In early January 2017, I was up late praying and seeking insight about the times we are in and also about Obama and Trump and their roles in it. The next morning my 9-year-old daughter came in my office and showed me Judges 9, specifically Jotham’s parable of the trees, because she felt like God wanted to show her something there.

I think the Lord did have a message for her, but it was also the answer to my prayer. The Lord brought Judges 9 and the story of Abimelech to my wife’s and my attention several times in the past, but we never really understood the significance of it. Then it hit me that story is a prophetic metaphor for America. Since Abimelech and the men of Shechem committed murder and wickedness, God allowed a spirit of conflict to arise that would divide the nation and provoke a form of civil war — as a divine judgment.

Barack Obama is represented by King Abimelech. Another character arises named Gaal son of Ebed, who stirs up the men of Shechem against Abimelech, and who I believe represents Donald Trump:

“Now Gaal the son of Ebed came with his relatives, and crossed over into Shechem; and the men of Shechem put their trust in him.” (Judges 9:26)

There was much bloodshed and many died in the ensuing battles, which again was God’s intended judgment for their wickedness. In the end Abimelech gets a fatal head wound from a millstone dropped on him.

51 But there was a strong tower in the center of the city, and all the men and women with all the leaders of the city fled there and shut themselves in; and they went up on the roof of the tower.
52 So Abimelech came to the tower and fought against it, and approached the entrance of the tower to burn it with fire.
53 But a certain woman threw an upper millstone on Abimelech’s head, crushing his skull. (Judges 9:51-53)

This is very interesting in light of the description of the beast ruler in Revelation 13:

“I saw one of his heads as if it had been slain, and his fatal wound was healed.” (Revelation 13:3)

Like Gaal, I believe the purpose of Trump is to stir up half the country, especially Christians, against the other half, who follow Obama and his agenda. I also believe a civil conflict/war is coming. Trump is probably going to be a scapegoat for the economic collapse, false flag attacks, etc., and that blame will be transferred onto the right and onto Christians, which is exactly what Obama wants and would set him up for a return to power.

MANY people believe martial law coming to this nation at some point. Let me make a speculation: It won’t be Obama who instigates martial law, but it will be Donald Trump in response to some catastrophe. Many will love it and want it and cheer for it because it’s Trump. Except in the end it will be turned against the people.

The week before the presidential inauguration, my wife and I asked the Lord directly whether Obama will stay in office. My wife has a peculiar gift of “randomness” where we ask God a question and she randomly opens the page of thesaurus or Bible and it is amazing how what is there speaks to the question, though it requires interpretation.

The first word we received was “circumference.” Interesting because I had recently taught my daughter how to measure the circumference of a circle. You start at one point, go all the way around and end where you began. In other words, you go full circle and back to where you started. The question was whether Obama will stay in office, and the answer was something like “full circle.”

Other words that came up were “claim” (to presidency or reins of power?) and “clash” (over competing claims to power?). Sounds like the story of Abimelech.

Michael Fisch lives in Idaho with his wife and two daughters. He believes we are living in the final days of this age and looks forward to the return of Jesus Christ, who is coming in glory to rule the earth righteously from Jerusalem. His favorite verse about these final days is Daniel 12:3: “Those who are wise will shine like the bright expanse of the heavens, and those who lead many to righteousness, like the stars forever and ever.”

Michael, I have dreams and visions of civil war coming, martial law and invasions by Russia and the China.

If this is the case, I do not think a wall on the southern border will be a good idea.
A Civil War will trap many on this side with no way to escape. And even if one manages to land somewhere in Latin America, good luck.

Thanks for sharing, Sometime in the last couple years the Lord woke me and said “Abimelech”. I looked up the name in the Bible but I didn’t understand. Reading your post my Spirit gives a resounding YES. This is true.

333 is Sign of God on BNFL. 333 one third of the Angels rebeled, Signiture of the Elite.

This is a deep and fresh new perspective …Thanks for sharing this sir. I also do have the “randomness” gift LOL, it’s actually more like the Holy Spirit dropping a passage of the Scriptures into the seeker’s heart or guiding the seeker’s hand to flip the pages of the Scripture to the right page. God bless Z3 news family and its my prayer that the Lord will shed more light on our paths as we seek HIm the more in Jesus name,amen.

I plead the blood of Jesus on this comment in Jesus name,amen

interesting before the prophet Kim Clement died, maybe 5 years before he quoted same scripture (Judges 9:51-53) for what would happen to BO. I remember it because BO was Potus at the time of the prophecy and Kim made sure everyone reading (i.e. secret service) would understand he (Kim) was speaking spiritually not physically–that a woman would toss a rock on BO head. Just a confirmation on what you shared.
With all due respect to those who believe BO the AC, I find myself in skeptical camp on who BO is though I’m open to changing my mind. Is he the son of perdition? maybe, I don’t know. Does he have an antichrist spirit? His fruit says yes. But I believe having an antichrist spirit and being son of perdition are two different things. Regardless thank you for sharing your prophecy and I thought you’d want to know kim clement shared same thing.

Thanks for sharing that confirmation.

Michael – Your words resonate with what God has allowed me to see, namely the ever deepening divisions that Trump will flame (just like Obama) and that Civil War will come to our Nation. The anger & hatred & violence will be shocking but this will occur not only due to people’s very different belief systems, differences in what people believe is occurring as the media is fully complicit in the confusion & fomenting of anger but also a multi-asset collapse (dollar, housing, stocks, bonds, student loan, etc.) throughout the Nation. Trump will CONTINUE to align with Conservatives & Christians & “patriots” so the LINK between Trump & these groups of people is STRONG in people’s minds. The ECONOMIC COLLAPSE & loss of the “American way of life” will be blamed on Trump, coupled with the foreign military presence that will come to America’s soil.

People will be so devastated, angry, desperate & hopeless by their “new reality” that they will DEMAND that anyone & anything linked to TRUMP & the “CAUSE” of the devastation be FULLY PUNISHED. For awhile, there will be lawlessness where “anything goes” as people’s inner moral compass are tested by the difficulty of the new reality. The “responsible group members” will likely be sought out. ? All of this will set up the Antichrist (Obama) to promise “peace & safety” but will lead to people devastated by events to demand FEMA CAMPS & much more……

I am concerned by how many Christians believe that Trump is offering a reprieve. Are Americans receiving a reprieve from:

– War & threats of war?
– Anger/disagreement with fellow citizens?
– Division in Congress?
– A dysfunctional government?
– Hate speech/hate activities?
– Continual increases to the debt-ceiling?
– The increasing militarization of the Police?
– The ongoing erosion of Constitutional rights since Clinton?
– The ever-increasing financial pressures most Americans are facing with lower waged jobs, rising healthcare & food costs, and fewer opportunities for a career?
– The continued aggressive censoring of the voices of Christians, Conservatives & “patriots” in print & digital media, including the Web?

The painful answer is “No”. Trump has talked a great game but look at his fruits. The situation is quite precarious. While the masses are distracted by the NFL, Harvey Weinsteins’ rapes/assaults/inappropriate behavior, and the crazy weather (fires, earthquakes, floods, hurricanes, etc.), here is what recently happened:

– The ridiculous changing narrative for the Las Vegas shooting with shifting timelines, a major witness disappearing, proof that there was more than one shooter, inconsistencies, multiple story lines, etc.
– HR Bill 3999 (interesting number – flip it!) with the effort to create a gun grab by using very vague language. Goal – repealing Constitutional gun ownership rights
– The very poor fundamental economics for our Nation with a very high likelihood of a dollar devaluation in the short-term
– The IMF statement last Friday that 9 of the world’s largest banks “may not be financially sound” and as they are all intereconnected, there is SYSTEMIC RISK (https://m.youtube.com/watch?v=70q7v9zqt68)
– China & Russia & Saudi Arabia have put the final nail in the coffin of the petrodollar agreement by allowing oil to be bought with gold instead of U.S. dollars
– Special forces & the U.S. Navy have arrived in South Korea to run military drills in a show of force against North Korea using “decapitation” (https://m.youtube.com/watch?t=4s&v=KzwfRvVoyfA)
– Congress introduced a new bill to allow for warranties searches

Focus your attention AWAY from Mainstream media’s BREAD & CIRCUS and ask God to provide discernment, each & every day.

You have seen the weak underbelly of this beast and it is vulnerable .

Wow! My spirit was really moved by this, Michael. I got a big “yes” and Amen.

I also wanted to add that I’ve been praying diligently for greater wisdom and discernment as prophecy unfolds. While I follow many alternative news sources along with numerous Christian sites, the term “controlled opposition” was recently dropped into my spirit. It feels like some of these (without naming anyone, because I honestly don’t know) could be a part of the plan to ignite a civil war between Trump/Conservatives/Christians and OBummer and his followers should he return to power. Blessings to you!

I never used to think the Obomber was the antichrist, but it does appear he’s headed that way.