This can’t be a coincidence! Another victim of the “venom in a syringe” Moderna experiment but of a Pastor. I encountered a patient who a few months ago who came in for a COVID test but complained of a severe sore throat. I offered to do a Strep Throat test because that is the protocol. He very arrogantly said to me, “Oh, that won’t be necessary, I’ve had both vaccines.” Hmmm..okay then I said to myself. As I proceeded to perform his “requested” nasal swab, I noticed a class ring on his finger. But this wasn’t some ordinary ring. The name of the school of his ring read, “Dallas Theological Seminary.”

So this tells me he was probably a clergyman or something similar. But taking a closer look into this institution revealed an interesting slogan: ‘Teach Truth. Love Well.’ Join believers from around the world at one of the most trusted and diverse seminaries and begin your journey of scholarship and service. 70+ denominations represented, adhering to a common faith.

Of course there are multitudes of theological institutions but what are they really teaching students?

Job 7:2-As a servant earnestly desireth the shadow, and as an hireling looketh for the reward of his work: 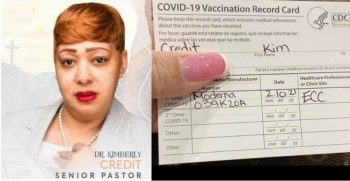 Dr. Kimberly Credit, a 44 year old female Pastor of an African-American Church in New Jersey, is dead from unknown cause, just days after receiving the second dose of the Moderna COVID Vaccine.

“As a leader, I want to lead by example especially for Pastors and the African American community. Got my first vaccine dose today. Thank you to Pastor Joe Carter for his leadership in pulling Black Clergy together and for allowing me to pray live for our news outlets. Thank you New York Times and Channel 2 News for interviewing me.” she wrote on her Facebook page.

Since the second Moderna shot is given 28 days after the first one, she would have received her second injection around March 10th.

All of her Facebook posts after this time were positive, giving no indication that she was feeling sick.

On Easter Sunday, April 4, 2021, the day before she died, she posted a message on her Facebook page about listening to an online event that evening and prefaced it with this statement:

“Listen… let me say this before I get a good and needed nap-in.”

Whether her fatigue and need for a nap was her usual Sunday routine, or because she was feeling ill, is not certain.

She was scheduled to lead The Preaching Lab podcast that next day, and posted this to her Facebook page that morning:

“Join the several thousand preachers who connect every 1st Monday for fellowship and to invest in our preaching and ministries.

Our guest lab professor is Pastor Leslie Callahan, PhD and our topic is “I Never Wanted to be a TV Preacher; Preaching in a Pandemic.

A year later, we have adjusted but the truth is that many struggled during this pandemic. Join us Dr. Callahan facilitates our plenary and we hear from several preachers.

The Reverend Dr. Leslie D. Callahan as the church’s first female pastor. Dr. Callahan delivered her first sermon as St. Paul’s pastor titled “It’s Time” on May 31 to an excited congregation of St. Paul’s members and friends. After a series of pre-installation celebrations, St. Paul’s installed Dr. Callahan as their 5th Pastor on September 27, 2009.

Streaming from The Preaching Lab page at 7PM EST.”

There was no indication that anything was wrong, but it was her last public post, as she died later that day, before the scheduled podcast.

Her obituary states that she died “suddenly and without warning.”

Those waiting for the livestream event on Facebook that night were shocked when they learned that she had just died.

Deaths from the new, EXPERIMENTAL, and unlicensed vaccine for COVID have happened over five-thousand (5,000) times in the USA alone.

If you are considering getting this so-called “vaccine” perhaps you should reconsider.

The COVID virus, which still has not been isolated according to the medical standards contained in Koch’s Postulates, has a 99% SURVIVAL rate!

Most people who get it, recover just fine.

There are many people who believe this COVID is actually Influenza “A” or “B” and the entire name COVID has been deliberately made-up falsehood to scare people into taking this genetic modification “vaccine.”

Now, thousands are dying and thousands more who have not died . . . . HAVE CONTRACTED so-called COVID!

The reality is, this so-called “vaccine” doesn’t seem to work.

Why risk dying from it?