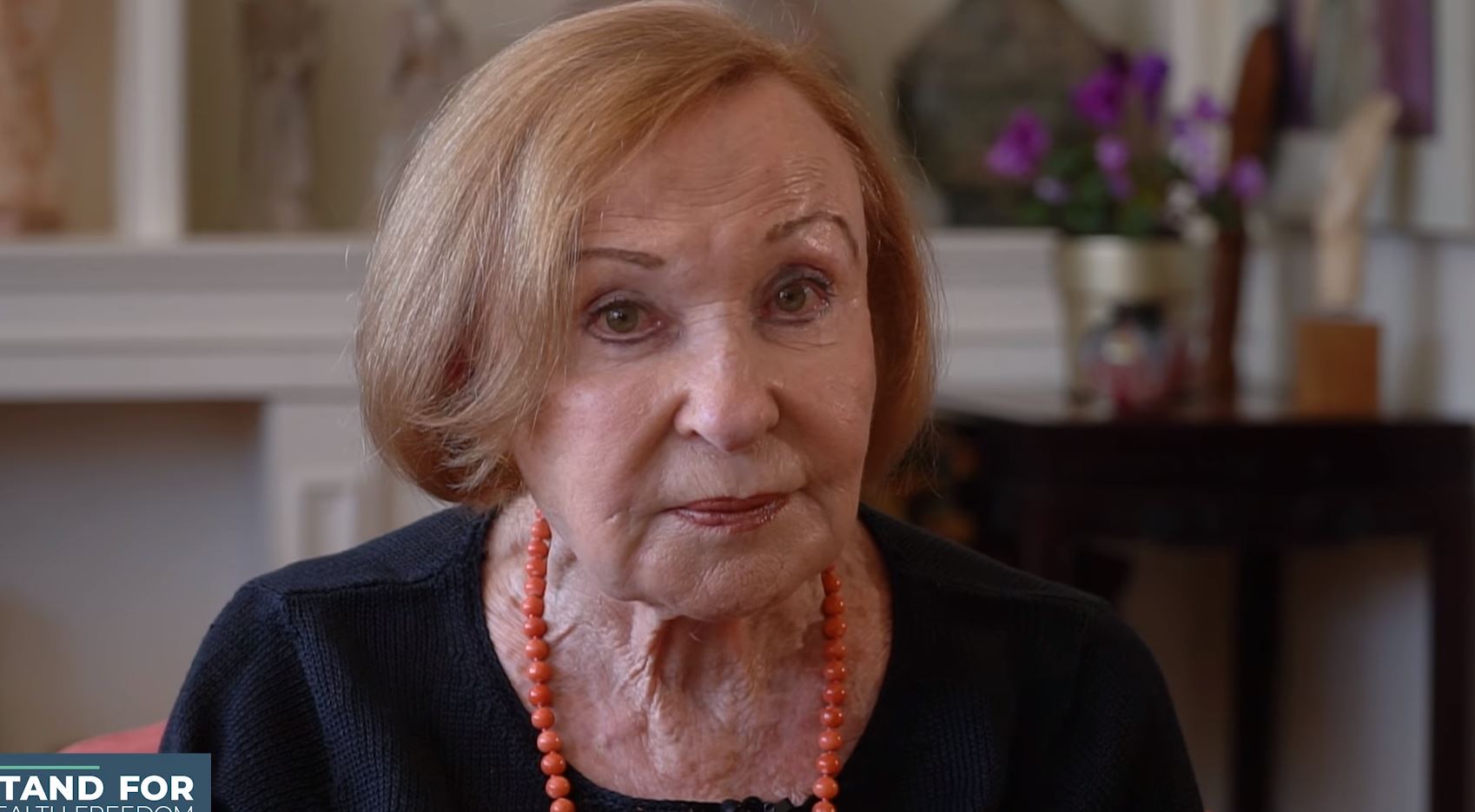 Vera Sharav was three and a half years old when her family was chased from their Romanian home in 1940.

She was herded to a concentration camp with her parents, and her father soon died of typhus. To save her daughter’s life, Vera’s mother claimed her daughter was an orphan and sent her away.

“I wound up, for about a year, going from one family to another,” Vera explained years later.

During a train ride, Vera eventually became attached to a family she felt comfortable with and trusted. Eventually, however, she was ordered to leave the family and join other orphan children on boats carrying them to their destination.

She refused to go.

“Everyone was on one of the three boats and I was sitting on my little valise just crying, screaming,” Sharav explained. “I just was not going to go, no matter what.”

Her defiance paid off. Vera was allowed to stay with the family. That night while she slept, a submarine destroyed the boats carrying the children. When Vera was told, she said nothing. But even then, at just six years old, she realized her disobedience had saved her life.

“That’s a lesson that right now is very needed,” Sharav said early in the COVID-19 pandemic. “Adults now are not rebelling against things that are wrong.”

‘No One Is Held Accountable’

Vera Sharav made these comments a year and a half ago. Early in the pandemic, she saw that something was wrong. Americans, like many people around the world, were simply complying with state orders.

This was happening even when state orders were reckless, such as Gov. Andrew Cuomo’s order that prohibited nursing homes from screening for COVID-19, a policy that introduced the virus into nursing homes, killing hundreds if not thousands of people.

“No one is held accountable at all,” she noted. “It’s unheard of that this should happen today in 2020, and this is called a civilized way of dealing with a public health emergency.”

Well before vaccines were being mandated, Sharav was warning about the danger in removing choices from individuals.

The Danger of Blind Obedience

Many Americans went through the pandemic quietly believing they were doing the right thing by complying as the state closed businesses, labeled workers “non-essential,” and coerced people into vaccination and masks. Others were likely afraid to speak.

But there’s a danger in obedience to authority, and few understand this better than Vera Sharav.

One of the most famous and frightening examples of these dangers comes from Stanley Milgram, an American social psychologist who conducted several studies on obedience and authority at Yale University during the 1960s.

Milgram was curious about why people commit evil acts. In his book Obedience to Authority, Milgram suggested that the great writer and philosopher Hannah Arendt may have been onto something when she concluded that Adolf Eichmann, one of the architects of the Holocaust, was not a sadistic monster in human flesh but a fairly typical person. While covering Eichmann’s trial in Jerusalem, Arendt suggested Eichmann lacked the cognitive ability to understand what he was doing, and that his actions were primarily the result of blindly accepting authority, leading her to dub the phrase “the banality of evil.”

To test how far the average person would stray from basic morality if encouraged by an authority figure, Milgram conducted one of the most famous social experiments in history, which involved hundreds of participants administering (fake) electric shocks to subjects.

The Atlantic offers an overview of Milgram’s controversial experiment:

Under the watch of the experimenter, the volunteer—dubbed “the teacher”—would read out strings of words to his partner, “the learner,” who was hooked up to an electric-shock machine in the other room. Each time the learner made a mistake in repeating the words, the teacher was to deliver a shock of increasing intensity, starting at 15 volts (labeled “slight shock” on the machine) and going all the way up to 450 volts (“Danger: severe shock”). Some people, horrified at what they were being asked to do, stopped the experiment early, defying their supervisor’s urging to go on; others continued up to 450 volts, even as the learner [begged] for mercy, yelled a warning about his heart condition—and then fell alarmingly silent.

Put aside for a moment the ethics of fooling participants into believing they are administering harmful shocks to subjects, and ask yourself how many participants you think refused to continue “shocking” people who wanted the experiment to stop.

The sad answer is not very many. As the Atlantic notes, 65 percent of people “went all the way” in Milgram’s most famous variation of the experiment. Psychiatrists surveyed prior to the experiment had predicted that less than one-tenth of one percent would go all the way and administer the highest “shock” to test subjects.

Why Choice Is Vital to Society

The link between the horrors Vera Sharav endured as a child during the Holocaust and Stanley Milgram’s experimemt is not hard to find.

In fact, Milgram, who was Jewish, made the link himself in the introduction to a 1963 paper, invoking the Nazis.

“Obedience, as a determinant of behavior, is of particular relevance to our time,” he wrote. “Gas chambers were built, death camps were guarded; daily quotas of corpses were produced … These inhumane policies may have originated in the mind of a single person, but they could only be carried out on a massive scale if a very large number of persons obeyed orders.”

The horrors of blind obedience to authority are visible throughout human history. This is why Vera Sharav says choice is vital to human society—and something humans should demand.

“There are crossroads in life where you have to make choices, and if you don’t, someone who will make the choice for you is not going to make it for your best interest,” she said. “The idea of just following authority without considering, what if they’re wrong? What if it’s not in my best interest? I wouldn’t want to live under such a regime. I know what it’s like. I know what that is. I would not do it again.”

Unfortunately, blind obedience is largely what we saw for much of the pandemic. (This is not to diminish peaceful protests that began erupting around the world in 2021 against the COVID state.)

Protests against COVID mandates didn’t just happen in Ottawa, Canada this is weekend.

For the 32nd Saturday in a row, Paris protests to end COVID law today. pic.twitter.com/4aWM5ZFXJn

The results of this obedience—of refusing to demand choice—are visible all around us: children who can’t read, 100 million more people in poverty globally, surging inflation, and more health issues than we can track.

Vera Sharav saw early in life the vast potential of evil when humans stop thinking for themselves and simply do as they are told. Her stubborn refusal to bend to authority is what saved her life, and her story is a tragic yet poignant reminder of what can happen when humans blindly follow authority.

Thank you very much for posting this important and well-written account and perspective! Very important. It’s as important as recalling the continual disobedience of the apostles (to the elite ruling authorities) immediately after Pentecost, and that an angel – after he broke them out of prison – actually instructed them to go against civil orders and to march right back to their preaching spot, and continue on (Acts5:20). Then there was the “disobedience” of Daniel, the “disobedience” of Shadrach, Meshach, Abednego, and the glorious outcomes.

For those Christians who are confused about when to obey/disobey civil authority, and whose consciences may have been molded according to misguided teachings on Romans 13, there is an excellent video on this topic, which is the best and most thorough explanation I have ever heard by a bible teacher. I hope every Christian will hear this, and grow in their knowledge of God’s perspective, and know HIS instructions and counsel to us on this important matter.

https://www.youtube.com/watch?v=JX9J6eXzbfg
(iThink Biblically / Christians do Not Have to Obey All Government Mandates. Romans 13 Explained.)

Great points Anna. Thanks for the scriptures and video link.