You are here: Home » News » Financial News » 6 Reasons Why Cyprus is the Perfect Storm 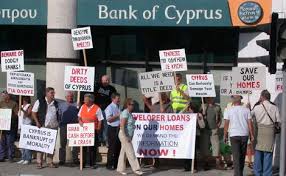 The economic crisis in Cyprus is unfolding very fast. Their banks are on the verge of collapse. The impact on Europe and the world could be devastating. The prospects for resolving this crisis appear dim.

So far the only news coming out of Cyprus has been bad news. Led by the Germans, the European Central Bank took a hard stand requiring immediate repayment of 5.8 billion Euros. If the funds are not repaid by Monday, March 25, the ECB will cut off financial aid to the largest banks in Cyprus, which means they could collapse soon after that.

It is hard to imagine how the ECB could have done a worse job handling this problem. Their mishandling of the crisis has increased the chances that Cyprus will ultimately withdraw from the EU. They showed no mercy demanding that funds be taken from the bank deposits of the people, including accounts below 100,000 euros. The brutal demands from the ECB have outraged the people of Cyprus. As a result, the parliament in Cyprus overwhelmingly rejected the ECB proposal.

Here are six reasons why Cyprus is the perfect storm:

Cyprus appears to be the perfect storm that could topple the European Union and the euro.