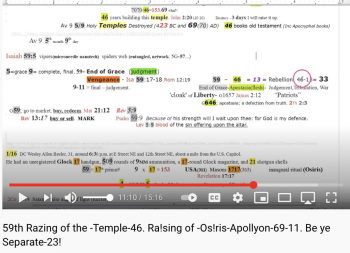 Massive Ritual being undertaken at the Capitol. This ritual occurs every single Presidential inauguration down the street from the Capitol (the House of the Temple) at the Headquarters of the Supreme Council of the Scottish Rite.

This has to do with the temple. You are the temple! They want to destroy your temple and rebuild it in their image.

The U.S. Capitol is a temple. It was designed, dedicated, and built as a temple to Osiris.

On January 6th, the “riot” was a BLOOD Sacrifice in the Temple. Exactly 14 days before the inauguration at the Capitol. 14 represents the “gene rations” – the double spiritual perfection. 46

This is the devil mocking, mimicking & corrupting God’s Word. Their goal is to corrupt the flesh, to destroy the Temple (the 46)…your Temple!

It is no coincidence that Trump was born 6/14/1946. 59th inauguration of the 46th POTUS (President of the United States).

911 plays into this ritual – the rebuilding of Their Temple.

They lavish gold out of the bag, and weigh silver in the balance, and hire a goldsmith; and he maketh it a god: they fall down, yea, they worship.

When weighed in the balance & found wanting…

You are the Temple of God. When you accept Christ & what He did for you on the cross for you, atoning for your sin through His blood, you are reborn & become a new creature. You are in the world but not of it! You are separate from this flesh, this 46!

59th inauguration – well the 5th month & the 9th day is Av 9 which is the day that the temples in Jerusalem were destroyed. According to the Habad, these are the authority in Jewish history, they claim the temples were destroyed in 423 BC & 69 AD. 46 books Old Testament (including Apocryphal books).  They knew it was all about the blood!

4 None calleth for justice, nor any pleadeth for truth: they trust in vanity, and speak lies; they conceive mischief, and bring forth iniquity.

5 They hatch cockatrice’ eggs, and weave the spider’s web: he that eateth of their eggs dieth, and that which is crushed breaketh out into a viper.

Cockatrice is a viper (same thing that the needles to deliver the vaccine in the style of viper fangs). The spider entangling. What they want to inject into your 46 will entangle you in the spider & viper web.

PROTECT your temple! Be born again in Christ!

Judgement is coming. Vengeance is the Lord’s! Not us…not the Patriots

For he put on righteousness as a breastplate, and an helmet of salvation upon his head; and he put on the garments of vengeance for clothing, and was clad with zeal as a cloak.

Read, study & pray on these Scriptures.

464 means apostasia; a defection from the truth

1657 (cloak of Liberty) Patriots – Are you living in legitimate liberty or licentious liberty? The devil will lead you down the latter path every time.

Greek 59 – buy, redeem, market – related to the Mark of the Beast. This is what is being put into place – no buying or selling without the mark.

News article a few days ago: arrested a man in Washington with an unregistered Glock 17. The Freemasons, Kabbalists have the same demonic base. They love the number 17. Had 509 rounds of ammunition of 9 mm ammunition for the 59th inauguration. 9 x 17 = 153. Mocking God. 21 shotgun shells. Referring to the 21st? Keith does not know. 777 – lightning of Heaven

The Freemasons set up the House of the temple in 1717, 303 years ago. Seek JESUS. Satan comes as an Angel of light & you will be deceived.

And no marvel; for Satan himself is transformed into an angel of light.

This is the makings of a ritual, unlike anything he has seen since 9/11. Little country in the Middle East that needs to be paid attention to.

Be in the Word! PROTECT YOUR TEMPLE!

16 Know ye not that ye are the temple of God, and that the Spirit of God dwelleth in you?

Nicholson1969 (Youtube Channel) shared at the 1 hour, 37 Minute mark in this podcast on YouTube Channel, The Scariest Movie Ever, this very important information which I have summarized below.

Transhumanism is the merging of technology & mankind (the clay, the flesh) to become a better man/woman which is completely Antichrist.

Understand the Enemy is after the Temple of God! Once you understand tgat God does not dwell in a physical temple but rather in the hearts of His Creation.

In Daniel it is revealed that the Enemy wants to set himself up in the Temple of God & declare himself God & be worshipped. If we are the Temple of God, you need to focus attention on the body.

Who opposeth and exalteth himself above all that is called God, or that is worshipped; so that he as God sitteth in the temple of God, shewing himself that he is God.

People were waking up to the fact that the Federal Reserve banks are not federal in any way and that the RFID chip would likely be used with the digital currency. The One World Government/Antichrist System wants into every human’s body (into The Temple of God). Google & other social media were studying algorithms.

The agenda & the end game did NOT change. What was changed was the agenda steps.

Casey, from YouTube Channel EntertheStars, another Christian participant in the podcast, shares that this dovetails with the Executive Order that Trump signed on Civil Asset Forfeiture. When the law is passed to make vaccines mandatory, the authorities can come take your property and all your assets for non-compliance.

On the eve of the seventh day after the Exodus from Mitzrayim / Egypt, the Children of Israel found themselves trapped between the Egyptian army and cavalry pursuing them from behind and the waters of the Red Sea before them. Hashem commanded Moshe: “Speak to the Children of Israel, that they should move forward!” Nachshon ben Aminadav of the tribe of Yehudah was the first to jump into the sea; the water split, and “the children of Israel walked across on the dry land in the midst of the sea.” All that night, a pillar of fire intervened between the Egyptians and the Israelites. When the Egyptians followed, the waters returned to their natural state and place drowning Pharaoh’s troops. The Children of Israel sang the Shira – “the Song at the Sea” in praise and gratitude to Hashem. To this day, the final days of Pesach are a special holiday, commemorating the splitting of the sea. The people of Israel then entered the Shur desert.

This is a great discussion with Dr L .Day & Jana Ben Nun. .hits the proverbial Nail on the head.

its time to be candid. https://www.bitchute.com/video/3KEhRVbglsnJ/ Listening to the first 7 mins or so – Packs a Punch!! spot on.

Hey, don’t forget that humans have 23 pairs of chromosomes in our DNA. That’s 46 chromosomes!!!

then the longer version: https://www.youtube.com/watch?v=GuPZ5nAFjVc very compelling info. & the Belly of the Beast. 32 min mark re; the meaning of the obelisk -also seen in many countries.(very worth watching.) puts end time prophecy into meaning.

Thanks Anne! Will check out the videos!

Anne – Fabulous videos! I knew much of this being an awake person from the USA but really excellent work. Highly recommend. Also learned I have not been getting the videos from this channel even though I am subscribed. ?

Yes Expat Gal I thought they were Great @ explaining so much. I have known re some of what they mention But these 2 brothers put it all together so Very well .with so many connections and the depth of research etc.

Many photos of the 2021 Inauguration taken in font of the Obelisk – Egypt F.M. etc

was reminded of this post (..birds of a feather flock together.)

You can’t make this stuff up!

Just found these links.. may be worth reading.

within the article this video.

few days ago had been looking re K.Schwab ( engineer ,economist .etc) – type that in & you get different articles + one including transhumanism plus info on WEF.

I can only say wow, what a divine inspiration to put this all together! Very, very informational.
Su much confirmation!