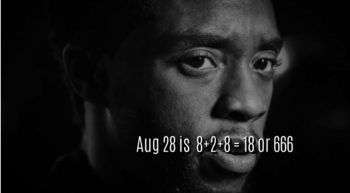 In this video, Youtube Channel, KijaniAmariAK, shows Ephesians 6:12-17 in our world. Specifically he shows in his 24 minute video “‘42’ OCCULT SYMBOLISM OF CHADWICK BOSEMAN’S DEATH”, how Chadwick Boseman is linked to 42, 44, the Antichrist (Obama), Black Lives Matter, Jackie Robinson, Kobe Bryant, The Black Panthers, Revolution & the spirit of lawlessness. As Christians, we understand the significance of 42 from Revelation 13:5.

He also shares information about Kamala Harris, Jay-Z, James Brown & Prince. All connected to the rise of the Antichrist & a time of chaos. Satan’s minions practice their occultic rituals & orchestrated blood sacrifices & numerology with the goal of “gaining power” for execution of their plans.

Chadwick Boseman was in a Movie called “42” which is Kobe’s number backwards. In this movie he was playing the role of Jackie Robinson and now Chadwick “dies” on the day we remember Jackie Robinson which was delayed till 8/28 this year & was announced during a Dodgers game.

Incredibly fascinating. God is showing those with the “eyes to see” & “ears to hear” exactly the times we are in.

Ephesians 6:12-17, King James Version
12 For we wrestle not against flesh and blood, but against principalities, against powers, against the rulers of the darkness of this world, against spiritual wickedness in high places.

13 Wherefore take unto you the whole armour of God, that ye may be able to withstand in the evil day, and having done all, to stand.

14 Stand therefore, having your loins girt about with truth, and having on the breastplate of righteousness;

15 And your feet shod with the preparation of the gospel of peace;

16 Above all, taking the shield of faith, wherewith ye shall be able to quench all the fiery darts of the wicked.

17 And take the helmet of salvation, and the sword of the Spirit, which is the word of God:

I fight the world, I fight you, I fight myself
I fight God, just tell me how many burdens left
I fight pain and hurricanes, today I wept
I’m tryna fight back tears, flood on my doorsteps
Life a livin’ hell, puddles of blood in the streets
Shooters on top of the building, government aiding relief
Earthquake, the body drop, the ground breaks
The poor one with smoke lungs and Scarface
Who need a hero? (hero)
You need a hero, look in the mirror, there go your hero
Who on the front lines at Ground Zero? (hero)
My heart don’t skip a beat, even when hard times bumps the needle
Mass destruction and mass corruption
The souls are sufferin’ men
Clutchin’ on deaf ears again, rapture is comin’
It’s all prophecy and if I gotta be sacrificed for the greater good, then that’s what it gotta be

On August 23, 2020 Jacob Blake was shot SEVEN (7) times by Kenosha Police in WI. As a result of this shooting Blake ended up Paralyzed from the waist down.

Alas! for that day is great, so that none is like it: it is even the time of Jacob’s trouble; but he shall be saved out of it.

Since we know that Jacob’s name was changed to Israel in scripture (*see Gen 35:10). This means that Jacob represents Israel. The fact that he was shot in the back 7 times is a reference to the 70th week of Daniel and points to the 7year covenant that will be made with Israel and confirmed by the Antichrist. He will not however fully honor the SEVEN year covenant but instead he will BREAK the covenant at the HALF WAY POINT or 3.5years into the agreement.

This is the real reason Jacob Blake who represents Israel was shot in the back 7 times and paralyzed from the waist down as a sign of the 7yr covenant that will be broken at the midpoint and the sacrifices will be stopped/frozen/paralyzed. When someone is shot/stabbed in the back they have been deceived/tricked or duped. Waist down on the human body is the mid point!

And he shall confirm the covenant with many for one week: and in the midst of the week he shall cause the sacrifice and the oblation to cease, and for the overspreading of abominations he shall make it desolate, even until the consummation, and that determined shall be poured upon the desolate.(Daniel 9:27)

It is at this time that we shall see the fulfilment of Daniel 12:1 which declares…

And at that time shall Michael stand up, the great prince which standeth for the children of thy people: and there shall be a time of trouble, such as never was since there was a nation even to that same time: and at that time thy people shall be delivered, every one that shall be found written in the book.

Chadwick’s Death connects back to Jacob Blake’s death since Jacob represents Israel and Chadwick represents the number 42.
42 is a reference to the 42 months given to the antichrist to speak great blasphemies against THE MOST HIGH after he receives the deadly headwound and lives. This is found is (Rev. 13:3-5) which declares….

3And I saw one of his heads as it were wounded to death; and his deadly wound was healed: and all the world wondered after the beast. 4And they worshipped the dragon which gave power unto the beast: and they worshipped the beast, saying, Who is like unto the beast? who is able to make war with him? 5And there was given unto him a mouth speaking great things and blasphemies; and power was given unto him to continue forty and two months.

1Then I was given a measuring rod like a staff and was told, “Go and measure the temple of God and the altar, and count the number of worshipers there. 2But exclude the courtyard outside the temple. Do not measure it, because it has been given over to the nations, and they will trample the holy city for 42 months. 3And I will empower my two witnesses, and they will prophesy for 1,260 days, clothed in sackcloth.”
4These are the two olive trees, and the two candlesticks standing before the God of the earth. 5And if any man will hurt them, fire proceedeth out of their mouth, and devoureth their enemies: and if any man will hurt them, he must in this manner be killed. 6These have power to shut heaven, that it rain not in the days of their prophecy: and have power over waters to turn them to blood, and to smite the earth with all plagues, as often as they will.

What a GLORIOUS TIME it is to be alive. We are seeing the signs warning those who have eyes to see of what is about to take place. This is what the scriptures meant in Matthew 24:24 when it declares…

For there shall arise false Christs, and false prophets, and shall shew great signs and wonders; insomuch that, if it were possible, they shall deceive the very elect.

YAH’s elect will not be deceived because we have eyes to see and we have been given fair warning of the times we live in and what is about to transpire!

PRAISE THE TRUE AND LIVING GOD!!!!

MAY THE MOST HIGH YAH BLESS YOU ALL!