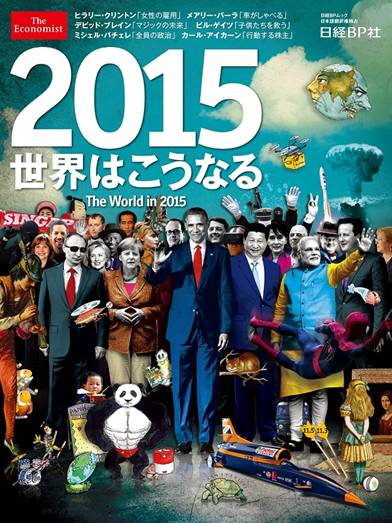 This front cover of the January 2015 issue of The Economist magazine shows a bizarre arrangement of world leaders and symbols that has a lot of people talking.

The magazine is owned by the Rothschild family, which is one of the world’s wealthiest families and believed to be one of the primary shadow figures controlling the western financial system.

Lots of analysis has been done studying the symbols and the positioning of objects in this image to find hidden messages about future events. What caught my attention (thanks to Darin Hibbert) was the numbers shown in the lower right corner, 11.5 and 11.3, in that order. I am assuming these are dates appearing on the tails of two arrows stuck into the ground at an angle, which could represent a downward movement in global markets on those dates. 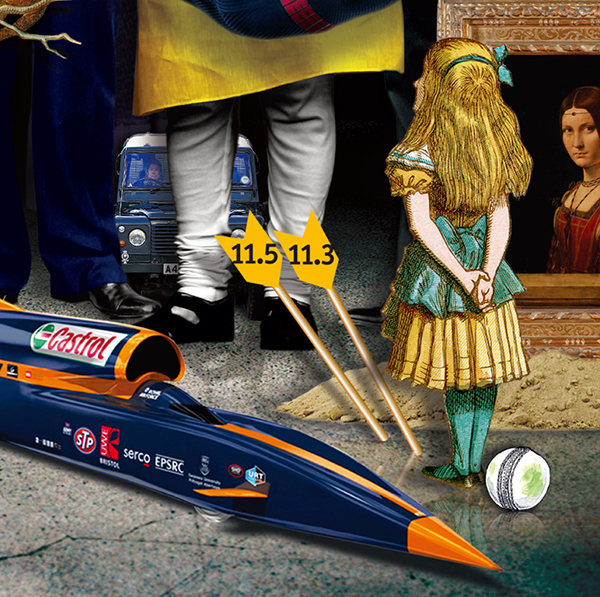 These dates are exactly the same as the ones announced by Treasury Secretary Jack Lew in an interview on CNBC’s Squawk Box on Monday October 19. During the interview, Secretary Lew warned about a terrible accident that could occur if the Congress fails to raise the debt ceiling by November 3.

Then he explained, “I just wrote a letter last week to Congress telling them that the date is November 3, but a few weeks ago we thought the date was November 5.” (S0urce: CNBC)

So initially the U.S. government was going to run out of money on November 5, then the date was revised to November 3, which puts the two dates in the same order as they appear in this bizarre image. It was already strange for the Treasury Secretary to warn about a terrible accident, but it is much stranger now. For more details on Secretary Lew’s comments, see my previous post,
Treasury Secretary Lew Gives Strange Warning About a Terrible Accident.

Another interesting thing about this cover image is Obama’s position smack in the center of all the world’s leaders. I don’t believe that was an accident, but it shows his key role in the planned new order these people want to impose on the world. I believe it is another confirmation of his identity, the son of perdition. He is the chosen one who has the full backing of the financial elite to carry out their evil plans.

See more explanations about the bizarre, cryptic symbols in this image.

These dates also remind me of the dream received by James Jansen about two years ago. He saw a global market crash happening on November 7, but was not shown which year. I shared his comments in my previous post, James Jansen: World Economic Collapse Coming.

Thanks to Darin Hibbert and Tony Leung for sharing these links!

This is a high definition picture where a lot more detail can be seen in case you don’t have one.

Ray, Thank You! I could see the words printed on the box held by the plane. It is Amazon with upward arrow. It does match the stock prize of Amazon!

A4 showing on the license plate of the Queen’s Range Rover may also indicate a chess move related to sacrificing the Queen in a chess game. ?

looks like a bomb under her car close up?

Rogue Money is talking of 311 days gap between two islamist attack on france,which can be seen on the cover photo.

came back to re read this article and look at the arrows….after reading ali winters post this morning….i could remember numbers but not what the were. If you rearrange the numbers you get 11/13/15……the day of the paris attack……also….in looking at the cropped picture of the arrows i see a painting in the background that strikes me as french , and the young girls strikes me as bavarian/german with what appears to be sand in between them……as ali said should we expect an attack on germany soon? Dont know…..admittedly this is all speculation on my part but we all know the luciferians hide their plans in plain site…..pray for the bretheren worldwide

Sorry, left out an important part, the CMA Awards opened with a “the Star Wars {skit/spoof} is CANCELLED” theme in the monologue. Also Captain Kirk (Star Trek, “Kirk out…”, was in it as a Storm Trooper in a “Hardened” trooper suit, kind of gives you an idea those in the know think it’s time to duck cover and trek somewhere due to the possibility of warfare where some of that “cancelled” star wars weaponry is needed to offset the more conventional. Kirk Out.

Interesting we had the very peculiar “Star Wars “spoof” (Blue Beam reference?) or “skit” (reference to MoSkit?) in the opening CMA Awards monologue, and 2 days later, the reported ICBM launch offshore LA. There is a real Two Arrows near a Navajo Casino in AZ, the arrowheads are above ground in real life, and from that spot, reports indicate ALICE/CERN would have been able to see that rocket in the sky from that viewpoint. Still trying to get how the Bloodhound rocket car figures, we’d need Lt. Columbo to sleuth that.

Numbers may no longer refer to Nov 3 debt ceiling issue as it has been increased already, unless the deal overlooked some issues.

The numbers might not have been dates to begin with.